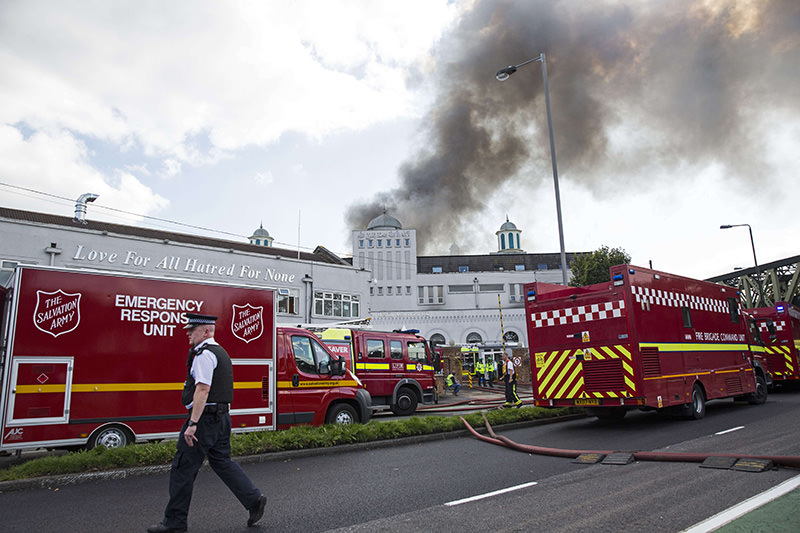 Emergency services tackle a blaze at the Baitul Futuh Mosque in Morden, south west London on September 26, 2015. (AFP Photo)
by Compiled from Wire Services Sep 27, 2015 12:00 am
A blaze broke out Saturday at a London mosque which claims to be the largest in western Europe.

16 and 14-year-old boys were arrested Sunday on suspicion of arson over London mosque fire.

Ten fire trucks were sent to fight the blaze at the Baitul Futuh Mosque in Morden, southwest London.

The smoke could be seen across the city.

One man, said to be in his 40s, was taken to hospital after suffering from smoke inhalation, London Ambulance Service said.

The mosque was built for the Ahmadiyya Muslim community to provide people with a meeting place and venue to hold social religious events.
The 5.2-acre (2.1-hectare) complex was completed in 2003. There is space for at least 10,500 people to pray, according to the mosque's website.

"It is a very beautiful building and what has happened is very sad," said Stephen Alambritis, leader of the Merton Council local authority.

"There were no people at prayer at the time. It does seem that evacuation procedures worked.

"The congregation there, especially on a Friday, are very large and peaceful and they add very much to the community. This will be a blow to their operation but they will be back."

The fire affected around half of the ground floor, part of the first floor and a section of the roof.