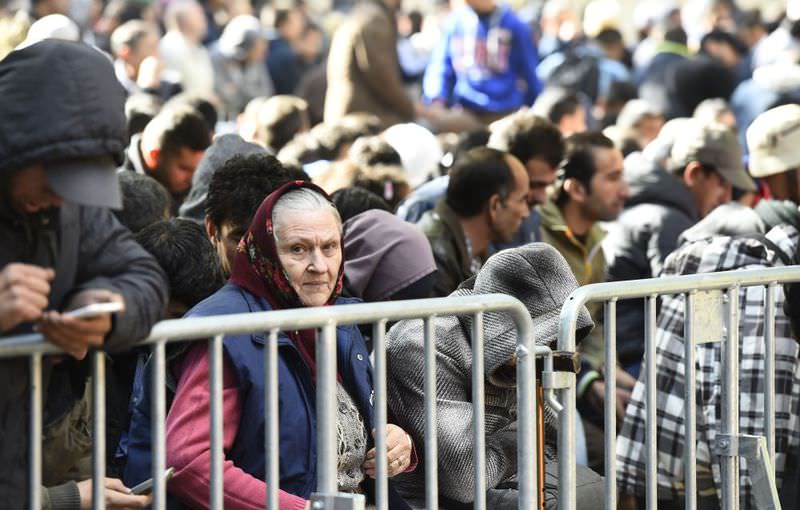 Refugees wait to register outside the State Office of Health and Social Affairs in Berlin (LAGeSo) where hundreds of migrants wait to receive help from the Berlin administration.
by Daily Sabah with Agencies Sep 30, 2015 12:00 am

The number of attacks and other criminal offences committed against refugee shelters in Germany has more than doubled this year compared to 2014, police said on Monday. Germany expects a record-breaking number of 800,000 new arrivals this year. The unprecedented influx of foreigners has fuelled social tensions and there have been protests and attacks against asylum shelters in some parts of the country.

"In the last few months, the crimes have reached a new level - both in quantity and quality," Sandra Clemens, spokeswoman for the BKA Federal Criminal Police Office, told Reuters.

The number of criminal offences against asylum shelters so far this year surged to 437 from around 200 in the whole of 2014, she said, adding that damage to property, graffiti and verbal insults made up the largest part of the offences. The total for 2015 included 59 crimes classified as violent, a new record high after last year's peak of 28, Clemens said. Of this year's figure, 26 were arson attacks.

Police have arrested 20 suspects in connection with these arson attacks, she said. As a whole, police identified 500 suspects for crimes against asylum shelters. The majority of these suspects were men aged between 18 and 25 years who often lived in the same town where the offences were committed, Clemens noted. The police statistics came after President Joachim Gauck warned that there are limits to how many refugees Germany can take in, showing growing concern even at the highest level over how to look after so many newcomers.

Last week, Germany's domestic intelligence chief also warned of a radicalization of right-wing groups amid a record influx of migrants, as xenophobic rallies and clashes shook several towns over the last weekend.

Domestic intelligence chief Hans-Georg Maassen said that "what we're seeing in connection with the refugee crisis is a mobilization on the street of right-wing extremists, but also of some left-wing extremists who oppose them." He added, speaking on Deutschlandfunk public radio, that for the past few years his service had witnessed a "radicalization" and "a greater willingness to use violence" by all extremist groups, including the far right, the anti-fascist far-left and religious extremists.

Maassen spoke as Germany expects to receive up to one million migrants this year, and after protests against refugee homes and clashes with police again rocked several towns, mostly in the former communist East Germany. Police and soldiers guarded two buses carrying about 100 migrants Saturday night to a shelter in the town of Niederau, in the eastern Saxony state, after right-wing protesters had rallied at the site, a former supermarket, since Friday. More than 1,000 people also demonstrated against refugees in several towns in the eastern state of Mecklenburg-Western Pomerania last Friday, including in coastal Stralsund where three people were wounded in clashes with counter-protesters.

In the eastern city of Leipzig, the right-wing rally "Offensive for Germany," organized by local anti-Islam activists with about 400 marchers, sparked a larger counter-protest that police said drew more than 1,000 activists. In the ensuing street clashes, the rival groups hurled rocks and fireworks at each other. In the western city of Bremen unidentified people attempted to set fire to a tent that was to house refugees in October.

Gauck, in an evening speech, urged "a broad social debate" on managing the influx, to ensure a "humane reception policy into the future." "Our hearts are wide open, but our capabilities are finite," Gauck said, according to the pre-released text of a speech he was to give in the western city of Mainz. "Given the rapid influx," he said, the government must now "promote the construction of apartments and build schools, hire teachers and kindergarten staff, adjust the labor market and vocational training, teach the German language and German law -- and do all of that at the same time." Gauck called Germany's massive volunteer efforts to welcome the migrants a "grassroots movement of humanity," but also warned of more impending "tensions between newcomers and established residents." Such conflicts could be best avoided, he said, when "neither side feels it is getting a bad deal."

Meanwhile, several German media outlets reported refugees are forming groups according to certain identities such as religion and ethnic origin. Recent reports revealed refugees from different "groups" have attacked each other with knives or other homemade weapons. Furthermore, several Christian refugees reported that they are being bullied by religious extremist refugees. Some are even threatened with death. "There are now so many stories, I no longer wonder," said Central Council of Eastern Christians Chairman Simon Jakob. "There are so many reports of violence, that's just the tip of the iceberg." According to Tagesschau, police are mulling dividing refugees in the camps in accordance with their religion in order to prevent more violence.

The dramatic rise in refugees, mostly coming from Syria, has been followed by increasing attacks against refugees fueled by xenophobia. Anti-immigration ideology and xenophobia have become more visible in the country as a result of the efforts of political parties like the NPD and Alternative for Germany (AFD), as well as anti-Islam and anti-immigrant initiatives like Patriotic Europeans Against the Islamization of the West (PEGIDA), which have staged anti-immigrant rallies and drawn thousands of people throughout Europe, especially in Germany.
RELATED TOPICS