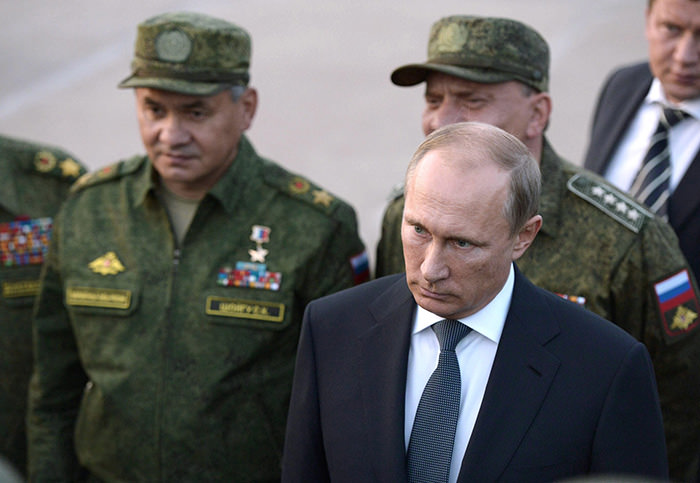 Russian President Vladimir Putin (Right) attends a military training exercise at the Donguz firing range in the Orenburg region, Russia, 19 September 2015.
by Daily Sabah with Agencies Sep 30, 2015 12:00 am
Russian lawmakers voted unanimously Wednesday to let President Vladimir Putin send Russian troops to Syria. The Kremlin sought to play down the decision, saying it will only use its air force and not deploy ground troops.

Putin has to request parliamentary approval for any use of Russian troops abroad, according to the constitution. The last time he did so was before Russia annexed Ukraine's Crimean Peninsula in March 2014.

The Federation Council, the upper chamber of the Russian parliament, discussed Putin's request for the authorization behind closed doors Wednesday. Sergei Ivanov, chief of Putin's administration, said in televised remarks after the discussion that the parliament voted unanimously to give the green light to Putin's plea. The proposal does not need to go to another legislative body.

Ivanov insisted that Moscow is not going to send ground troops to Syria but will only use its air force "in order to support the government Syrian forces in their fight against the Islamic State" group.

Ivanov told reporters that Russia decided to help Syrian President Bashar Assad in order to protect its own country from Islamic militants, not because of "some foreign policy goals or ambitions that our Western partners often accuse us of."

"We are talking about Russia's national security interests," Ivanov said, adding that that Moscow is worried about a growing number of Russian recruits going off to fight for the Islamic State group.

Ivanov said thousands of Russians had gone off to fight in Syria so it would be wise for Moscow to "take pre-emptive steps and do it on the distant frontiers instead of facing the issue here and later on."

Meanwhile, the United States believes that Russia has started carrying out air strikes in Syria in the vicinity of Homs, a U.S. official told Reuters on Wednesday, adding that Moscow gave the United States a one-hour advanced notice of its operations.

The official, who spoke on condition of anonymity, said the information on the air strikes was preliminary and declined to give any details, including on the number of strikes or the aircraft used.

In addition, Russian airstrikes in Syria do not appear to be targeting ISIS-held areas and may extend to other areas beyond Homs, US official has said, according to Reuters report.

The U.S. military's Central Command did not immediately respond to a request for comment.

Putin's request comes after his bilateral meeting Monday with President Barack Obama on the sidelines of the United Nations General Assembly meeting in New York, where the two were discussing Russia's recent military buildup in Syria.

Ivanov said the motion comes after Moscow received a request from Assad asking for help. He said the biggest difference between other countries conducting air strikes in Syria such as the United States is that "they do not comply with the international law, but we do."

Moscow has always been a top ally for Assad. The war in Syria, which began in 2011, has left at least 250,000 dead and forced millions to flee the country. It is also the driving force behind the record-breaking number of asylum-seekers fleeing to Europe this year.

Parliament cut its live web broadcast on Wednesday while it was considering Putin's request.

The Kremlin also reported that Putin hosted a meeting of the Russian security council at his residence Tuesday night outside of Moscow, saying that they were discussing terrorism and extremism.

Russian opposition was rattled by the Kremlin's request and the way the vote was held.

"The fact that the Federation Council considered sending our troops abroad behind closed doors looks unconstitutional," opposition leader Alexei Navalny said on Twitter. "Or is it just their own grandsons who are going off (to fight)?"
Last Update: Oct 01, 2015 2:42 pm
RELATED TOPICS