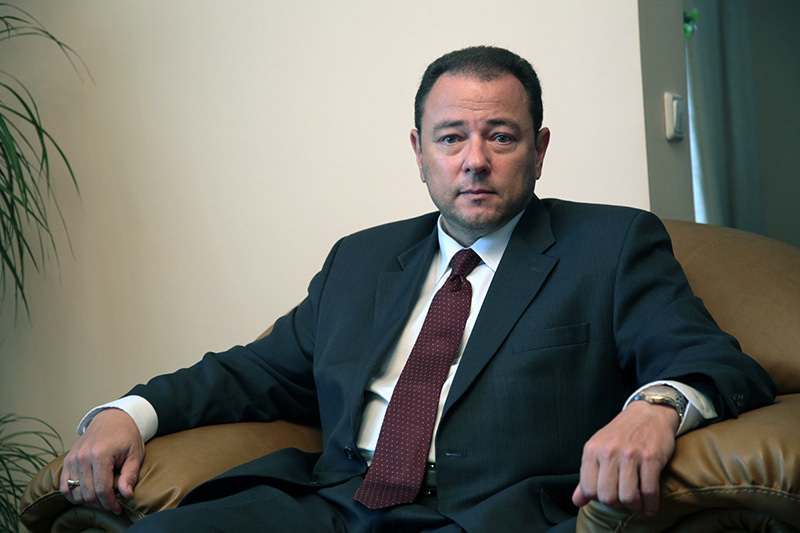 |AA Photo
by Ali Ünal Oct 02, 2015 12:00 am
Ukrainian Ambassador to Ankara Sergiy Korsunsky said the agreement reached between the representatives of Ukraine, France, Germany, Russia and the Organization for Security and Co-operation in Europe (OSCE) on Tuesday and today's meeting in Paris will be an important step in the of the Minsk process that aimed to resolve the clashes between Ukraine's government forces and Russian-backed separatists in the east of the country. Still, he said everything depended on Russia and the separatists respecting the agreements.

Tuesday's agreement envisages the removal of tanks, artillery and other weapons that have calibers of less than 100 mm to the distance of 15 kilometers from the frontline.

Korsunsky said Ukraine would do its best to carry out the deal, but warned that previous experience made them cautious about Russia's willingness to keep to the word of the agreement. Speaking about today's meeting, he said: "We expect this meeting to initiate another stage of the political process directed at establishing a long-lasting peace in the eastern part of Ukraine."

He said Russia needed to withdraw all its forces from the occupied territories of the Donbas area of Ukraine, return control over state-border in that region to Ukraine, free all Ukrainian hostages illegally kept by Russia and allow to hold local elections in the region according to Ukrainian law with full and unrestricted participation of international observers.

He also argued that it was imperative for the leaders of Germany and France to continue to present a united front against Russian aggression and efforts to distract attention from Ukraine with its "adventure in Syria."

When asked about Ukrainian President Petro Poroshenko's serious criticism of Russian conduct in his speech at the U.N. General Assembly and how a lasting peace could not be assured in an environment of distrust, Korsunsky said Poroshenko statements did not reflect his personal opinions but was a response to Russia's aggressive policies and, moreover, was shared by most of the international community. He accused Russia of backing armed conflicts in former Soviet republics to expand its influence, citing the examples of Transnistria in Moldova, Nagorno-Karabakh in Azerbaijan and Abkhazia and South Ossetia in Georgia. He said the continuing conflicts would have been resolved long ago if it had not been for Russian interference.

Korsunsky said Russia needed to understand that diplomacy was better than war in order to end its isolation.

He also spoke of Ukraine's continuing desire to join NATO, adding that Ukraine would hold a referendum as soon as the military was in compliance with NATO regulations. "Only about 16 percent of the Ukrainian population positively looked at the possible NATO membership of Ukraine. Now this index is more than 60 percent," he said.
Last Update: Oct 02, 2015 11:42 am
RELATED TOPICS