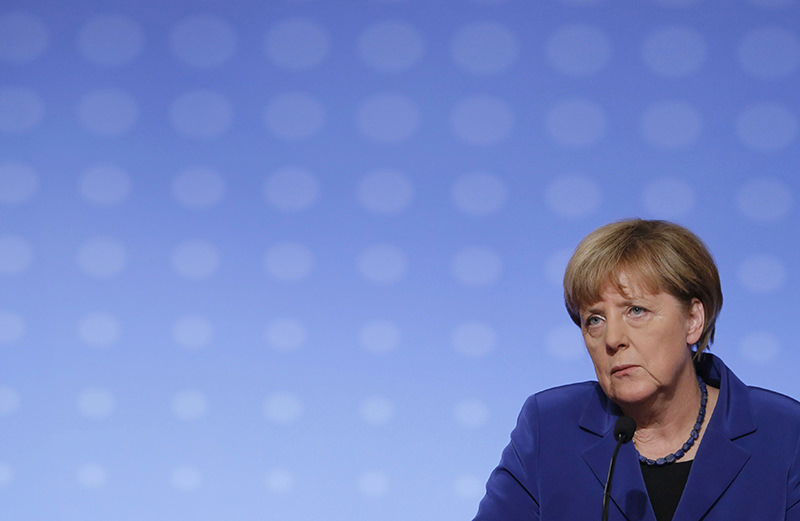 | Reuters Photo
by Compiled from Wire Services
Oct 04, 2015 12:00 am
German Chancellor Angela Merkel told a German radio station that military efforts were necessary in Syria even though they would not put an end to the war there.

"Regarding Syria, I said for the first time: We will need military efforts, but military efforts will not bring the solution; we need a political process but that has not really got going very well yet," she told Deutschlandfunk, according to the text of an interview due to be broadcast later on Sunday.

She also said it would be necessary to involve the regime of Syrian President Bashar al-Assad in talks.

"To get to a political solution, I need both the representatives of the Syrian opposition and those who are currently ruling in Damascus and others as well to get real successes and then above all the allies of the respective groups."

She said Russia, the United States, Saudi Arabia and Iran could play an important role as well as Germany, France and Britain.

Merkel also said that Germany is not going to consider weakening its commitment to sheltering asylum seekers, swatting back calls from a key group in her governing coalition.

Members of the Christian Social Union (CSU) - a sister party to Merkel's Christian Democrats (CDU), which operates solely in the southern state of Bavaria - have called for a loosening of the requirement in Germany's basic law that all asylum seekers be taken in.

The CSU members say the move is necessary as Germany buckles under the strain of migrants rushing to Germany, many of them refugees fleeing wars in places like Syria and Afghanistan. Estimates say up to 1 million might seek refuge in Germany this year.

Merkel told journalists with the programme Interview of the Week on Deutschlandfunk that there would be no changes to Germany's basic law and that Germany would continue to abide by the 1951 Geneva Refugee Convention.

However, she did repeat statements that Germany must speed up its asylum processing system and that those migrants who come to Germany and are discovered not be in need of asylum must then be required to leave Germany. The important thing is to review the cases of everyone "even if they have to leave our country again," she said, in the interview, set to air at 0905 GMT.

She also repeated arguments that steps must be taken to quell the violence that leads people to flee to Europe in the first place and noted that other members of the European Union must be called upon to take on more of the incoming migrants, as opposed to the three or four countries that are handling the lion's share right now.

But she also rejected a further CSU proposal that Germany consider setting up fences on its border.

"I don't think that fences help. We saw that in Hungary," she said, referring to that country's recent efforts to keep migrants from crossing over its borders from the Balkans.

Merkel's statements continue to put her at odds with CSU leader Horst Seehofer, who has demanded that she admit Germany's capacities to take in more refugees has been exceeded.

Bavaria has been the first point of entry for many migrants reaching Germany, which has led to tensions in the wealthy state. Seehofer has distanced himself from other CSU members calls for a change to the asylum law, but has still said Merkel's decision to welcome migrants was a mistake.

Pointing to growing concerns registered in national polls, he is demanding that she set limits on the flow of people into Germany. However, Merkel has refused to yield and made statements Saturday, during the celebrations of 25 years since German reunification, to urge Germans to help out with the crisis.