Children's bodies wash up on Kos in latest migrant tragedy 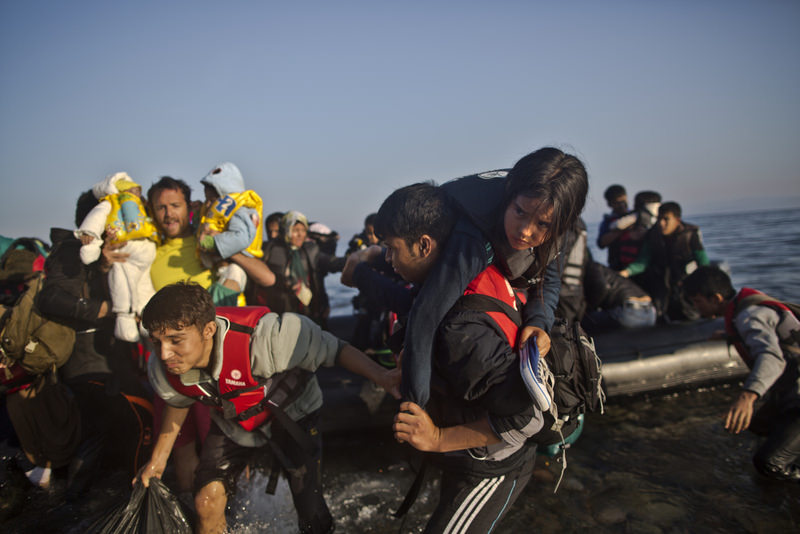 by Daily Sabah with Wires
Oct 06, 2015 12:00 am
The badly decomposed bodies of two children were found washed up on the Greek island of Kos on Sunday, the latest victims of a crisis that has seen 630,000 people enter the EU illegally this year.

A dead baby boy, thought to be less than a year old, was discovered on a hotel beach early Sunday, dressed in green trousers and a white t-shirt. The decomposed body of an older child, wearing blue trousers and a pink t-shirt, believed to be three- to five-years old, was found hours later at the same spot.

Authorities believe the children were from migrant families that had been trying to reach Kos by dinghy, Greek media reported. Both bodies have been transferred to a hospital for an autopsy and DNA testing.

Greece has been struggling to cope with a wave of migrants making the dangerous crossing from Turkey. The EU's border chief Fabrice Leggeri said 630,000 people have entered the bloc illegally this year.

Over 310,000 of the migrants have landed in Greece this year, according to U.N. refugee agency figures, and nearly 3,000 have died or disappeared during the crossing. At least 15 babies and children drowned when their overcrowded boat capsized off the Aegean island of Farmakonisi in September, and Greece's Coast Guard fears the problem will worsen as winter approaches.

"Member states must understand that in place of deploying hundreds of police at their national borders, it would be more useful to send them to the (EU's) external border," Leggeri told the Ebra press group. The huge influx of people has exposed deep rifts among the EU's 28 member states over where the newcomers should go and what should be done to stem the flow. Plans to share out 160,000 migrants throughout the bloc using mandatory quotas have been opposed by several member states, and mooted "hotspots" on Europe's borders have proved controversial.

Greece's Coast Guard said yesterday it has rescued 1,743 refugees or migrants over the weekend in 57 separate search and rescue operations near the eastern Aegean islands. Those rescued were picked up between Friday morning and Monday morning off the islands of Samos, Farmakonissi, Kos and Megisti, the Coast Guard said. They do not include those who make it to the islands themselves from the nearby Turkish coast, usually in overloaded inflatable dinghies.

Harrowing pictures of three-year-old Syrian refugee Aylan Kurdi, whose body was found washed up on a Turkish beach after the boat carrying his family to Kos sank, caused an outpouring of emotion around the world, pressuring European leaders to step up their response to the refugee crisis. But two weeks later EU members were still at odds over how to accommodate the tens of thousands of new arrivals.