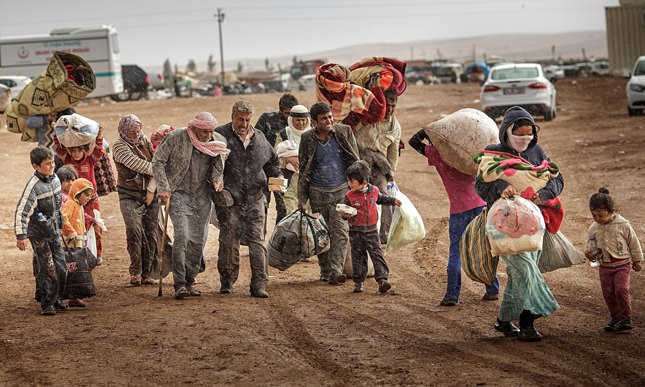 by Anadolu Agency
Oct 06, 2015 12:00 am
The European Council president Donald Tusk has warned of potential new waves of refugees should the Bashar al-Assad regime come out victorious in the conflict gripping Syria.

Tusk told lawmakers in Strasbourg on Tuesday that a "potential victory" of the Syrian regime would result an additional 3 million refugees, citing Turkish estimates.

"A potential victory of Assad's regime, is more likely today because of Iran and Russia's engagement in Syria, and will result in the next migratory wave," Tusk said. "Yesterday, this message was confirmed by President [Recep Tayyip] Erdoğan. According to Turkish estimates, another 3 million potential refugees may come from Aleppo and its neighborhoods," he added.

Turkey is currently hosting 1.9 million Syrians and spending close to $8 billion since the start of the civil war in Syria.

Tusk also criticized countries for failing to fully respect EU asylum and border rules, naming Hungary, Italy, Slovakia and Greece and called for unity and solidarity within the EU countries.

"We keep talking about solidarity, about quotas and greater assistance for refugees on our soil, and for those who remain in camps and countries outside the EU. Let's remember, however, that solidarity requires mutual understanding and respect," he said.

"We have to respect commonly agreed rules... It is our common obligation to assist refugees as well as to protect the EU's external borders," Tusk said, adding that when countries say they intend to flout the laws "they undermine the essence of solidarity and our community".

The head of the EU Council underlined the importance of controlling the EU borders.

"The first commandment today is restoration of control on the EU external borders as condition sine qua non of an effective, humanitarian and safe migratory policy," Tusk told lawmakers.

Guy Verhofstadt, leader of the European Liberals and Democrats, expressed his "disappointment" after Tusk's speech and called on for an immediate European initiative to end the conflict in Syria.

"Council President Tusk's and High Representative [Federica] Mogherini's priority must be to negotiate a common European position to defeat ISIS and get rid of Assad...The EU should support an immediate installation of a no-fly zone in Syria,"Verhofstadt said.

"We urgently need to organize a new donor conference to finance the refugee camps in Lebanon and Turkey, so that people are safe and children can go to school instead of being on the run," he added.

The president of the European Commission Jean-Claude Juncker said that EU countries needed to work with Turkey to tackle the refugee crisis.
"Turkey and the European Union need to walk together [down] this path. We need to look at providing help to those unfortunate people who come to our shores," he said.

Juncker added that a joint EU-Turkey action plan addressing the refugee crisis would be revealed Tuesday.