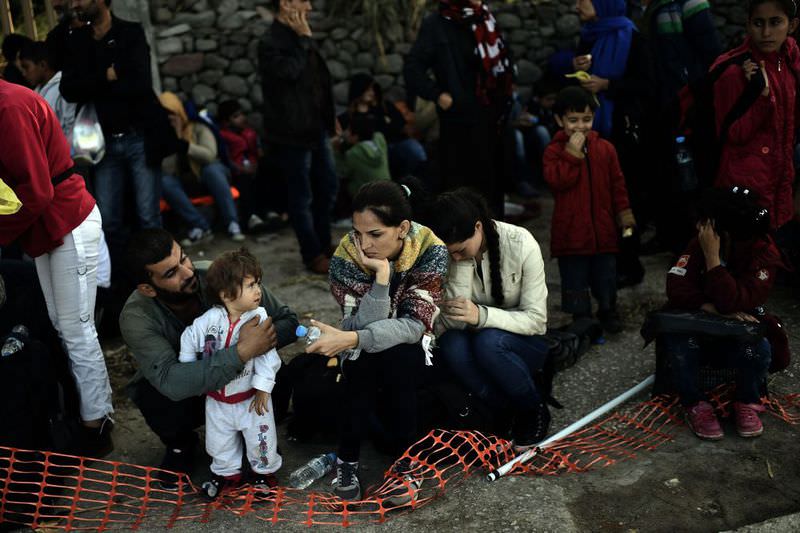 Refugees and migrants rest after arriving on the Greek island of Lesbos after crossing the Aegean Sea
by Daily Sabah with Agencies Oct 06, 2015 12:00 am

EU's border agency Frontex has demanded fundamental changes in Europe's response to the Syrian crisis with 630,000 refugees having entered the bloc so far this year. Meanwhile, Germany has raised its refugee expectations from 800,000 to 1.5 million, and German authorities have said the country needs to limit the number of refugees or even close its borders

The EU's border agency chief has pleaded for radical changes to the way Europe is dealing with its migrant crisis as he revealed 630,000 people have entered the bloc illegally so far this year.

"We registered about 630,000 illegal border crossings as of the end of September," Frontex executive director Fabrice Leggeri told the French Ebra press group in an interview which appeared yesterday. "Member states must understand that in place of deploying hundreds of police at their national borders, it would be more useful to send them to the (EU's) external border," he said. "The real frontier," he added, is "Lampedusa, Lesbos and Melilla," referring to some of the epicenters of Europe's migrant and refugee crisis. "If every state manages the crisis on their own, without coordinating with their neighbors, the (migrant) flux will go from one country to another, to everyone's cost."

While doubling the number of Frontex staff to be stationed in frontline Greece to around 200 was progress, he claimed that "if we had one or two thousand European border guards to help the Greek authorities, it would have a spectacular effect on the crisis there."

While Europe is relying on huge new so-called hotspot camps in Greece and Italy to hold migrants while their claims for asylum are processed, he claimed than on average only "39 percent of deportation orders are carried out" - mostly because the migrants' countries of origin refuse to take them back. "Let's be realistic, if we want to send illegal migrants back to their countries of origin, we will need detention facilities, in the hotspots in particular," Leggeri said. And he dismissed a European border force evoked by EU Commission President Jean-Claude Juncker as "not feasible in the medium term." "We have to go towards a more integrated management of our borders... which would allow Frontex in certain cases to intervene in a crisis without waiting for the member states in question to ask for it," he insisted. Leggeri predicted that "migratory pressure is a long-term challenge," even if "we succeed in bringing under control within the next year the brutal, unprecedented flow we are now facing."

"I do not see a short-term solution in Syria or in the Horn of Africa," he said, "or between the difference in development between Europe and sub-Saharan Africa" - areas from which many of those seeking a better life in Europe are coming from.

Meanwhile, Germany, the country that has been mostly affected by the influx in the continent, needs to limit the number of refugees it takes in or even close its borders, conservative allies of German Chancellor Angela Merkel said at the weekend, as the country deals with record inflows of people fleeing from war and poverty.

Germany expect up to 1.5 million asylum seekers to arrive in Germany this year, the Bild daily said in a report published yesterday, up from a previous estimate of 800,000 to 1 million. Germany's top-selling newspaper cited an internal forecast from authorities that it said had been classed as confidential. Many of the hundreds of thousands of people pouring into Europe to escape conflicts and poverty in the Middle East, Africa and beyond have said they are heading to Germany, Europe's largest economy. Bild said the German authorities were concerned about the risk of a "breakdown of provisions" and that they were already struggling to procure enough living containers and sanitary facilities for the new arrivals.

"Migratory pressures will increase further. We now expect 7,000 to 10,000 illegal border crossings every day in the fourth quarter," Bild cited the report as saying. "This high number of asylum seekers runs the risk of becoming an extreme burden for the states and municipalities," the report said. The authorities' report also cited concerns that those who are granted asylum will bring their families over to Germany too, Bild said.

German Finance Minister Wolfgang Schaeuble said Europe needed to restrict the refugee intake, and members of the Christian Social Union (CSU), the sister party to Merkel's conservatives in Bavaria, said Germany should shut its borders. Bavaria shares a border with Austria and has borne the brunt of the influx. "If as many asylum seekers continue to come to Germany as in recent weeks, we won't have any choice but to temporarily stop taking people in and to close the borders to them," CSU politician Stephan Mayer told newspaper Frankfurter Allgemeine Sonntagszeitung (FAS).

Thousands of people are streaming into Germany every day, attracted by relatively liberal asylum laws and generous benefits. Some 6,750 people arrived in Bavaria alone on Friday and another 6,000 piled in on Saturday, a police spokesman said. Pressure on Merkel is mounting though. Some politicians urged her to introduce upper limits for migrant intake. "We can't save the whole world," Bavarian Finance Minister and CSU member Markus Soeder told Passauer Neue Presse.

CDU politician Lorenz Caffier told newspaper Welt am Sonntag that as many as 1.5 million refugees could arrive in Germany this year but many of the federal states "are at their limit." Members of the Social Democrats (SPD), Merkel's junior coalition partner, also stressed that Germany had exhausted its ability to deal with the crisis.

Chancellor Angela Merkel, who said Germany would grant asylum to those fleeing Syria's civil war, has recently seen her popularity ratings slump to a four-year low.

The turmoil in the Middle East and the five-year war in Syria have led many people to flee the conflict in an attempt to seek security and shelter in a more prosperous and peaceful country, such as in Europe. Compared to Syria's neighboring countries, the U.N. refugee agency encouraged European countries to do more to share the burden of the international community in the migrant crisis.
RELATED TOPICS