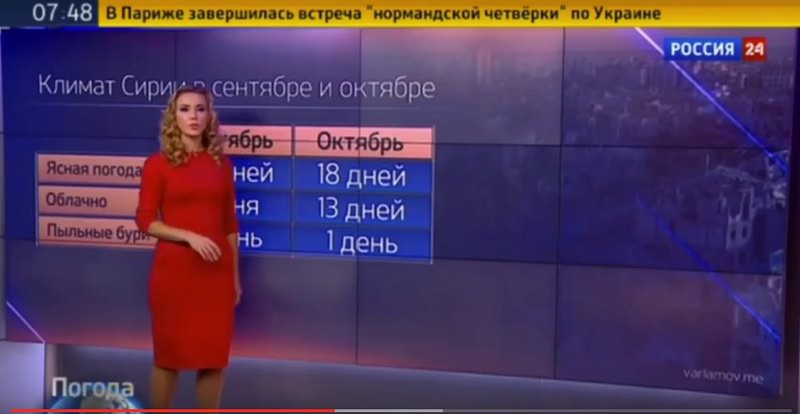 by Daily Sabah with AFP Oct 06, 2015 12:00 am
Russian TV has taken its gung-ho coverage of air strikes in Syria to another level by airing cheery weather forecasts for its fighter jets bombing Syria.

A female forecaster on the state-owned Rossiya 24 rolling news channel told viewers that Syria's weather in October was "ideal for carrying out operational sorties".

Standing in front of an image of a bomber and the headline "Flying weather", the forecaster gave a straight-faced analysis of the perfect conditions for bombing.

Light cloud cover "will not make flying more difficult and will not influence the systems for aiming weapons," she told viewers on Saturday.

"Experts note the time for the start of the air operation (in Syria) is chosen very well," the forecaster said, flicking between weather charts and defence ministry footage of strikes.

The forecast came after the same channel ran a similarly sunny forecast on Thursday after the first Russian strikes, promising stable meteorological conditions.

"From today, Syria has become another Russian region and is included on the weather," commented one Twitter user.

"Even in the USSR they didn't get propaganda into the forecasts," wrote reader Tatyana Karagova on the Novaya Gazeta opposition newspaper's website.

It is not the first time in recent years that Russia's weather has gone political. TV channels swiftly including Crimea in their forecasts after it was annexed by Moscow in March last year.

One forecaster on Rossiya 24 warned of clouds gathering over eastern Ukraine and a "wind of change" shortly after pro-Kremlin protesters declared a people's republic in the city of Donetsk in April last year.

The Syria air strikes have eclipsed previous wall-to-wall coverage of the conflict in Ukraine.

Russia began flying combat missions over Syria on Sept. 30 following an escalation in its military support for President Bashar al-Assad's regime. Despite claiming to be targeting ISIS, the U.S. and its allies have complained of Russian airstrikes on "moderate" forces fighting Assad.

Russian ambassador in Turkey was summoned by Turkish authorities twice for airspace violation.

Russian Ministry of Defense spokesman Igor Konashenkov has claimed that the violation of Turkish airspace was caused by 'bad weather conditions.'

NATO denounced Russia in a statement on Monday for violating Turkish airspace along the frontier with Syria, while NATO ambassadors told Russia to halt its incursions into Turkey's airspace saying the violations were both 'extremely dangerous' and 'irresponsible.'