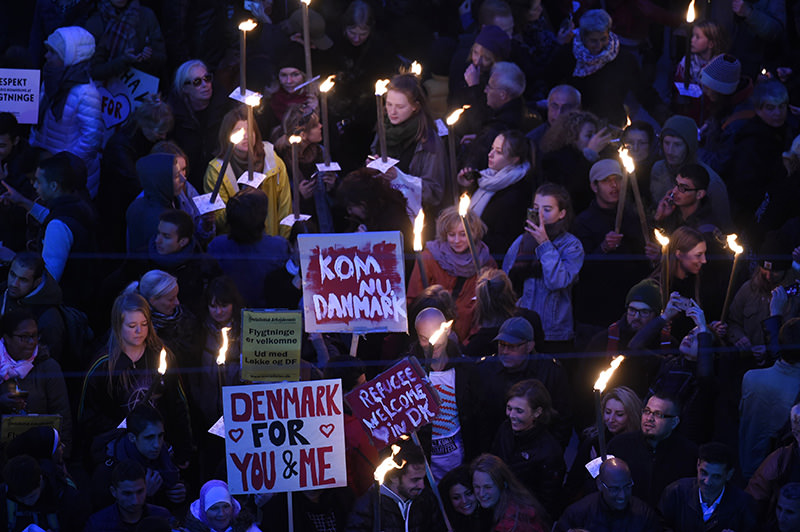 People demonstrate in front of the Danish parliament in Copenhagen, Denmark on October 6, 2015 (AFP Photo)
by Oct 07, 2015 12:00 am
Thousands of Danes braved chilly winds on Tuesday to march in Copenhagen for the "decent treatment of refugees" and to protest a decision by Denmark's rightwing government to slash benefits for refugees.

Danish police told AFP that between 20,000 and 25,000 people had joined the three-mile march which ended at Parliament Square with music and speeches.

"This is only one manifestation among many from a population that thinks enough is enough," Anne Lise Marstrand-Jorgensen, one of the organizers, told the marchers.

Similar demonstrations were also planned in the smaller Danish cities of Odense and Aalborg.

Carrying torches as darkness fell, demonstrators shouted slogans like: "Say it loud and clear, refugees are welcome here" and a cheer went up as thousands entered Parliament Square.

Last month, some 30,000 people joined a Copenhagen rally in favor of taking in more refugees.

To pass such legislation, the ruling Venstre party needs the backing of the anti-immigration Danish People's Party (DPP) -- which garnered more than one in five votes in the election.

On July 1, Denmark slashed benefits to asylum seekers in a bid to reduce the number of refugees coming to the country.

Under the new rules, which came into effect in September, a recently-arrived immigrant without children receives 5,945 kroner (797 euros/$897) per month in benefits, almost half the 10,849 kroner they previously received.

Single parents arriving from a non-EU country receive 11,888 kroner per month compared to the previous 14,426 kroner.

On September 7, the government placed adverts in several Lebanese newspapers warning that Denmark had "decided to tighten the regulations concerning refugees."

On Monday, the government also pledged to toughen the procedure for acquiring citizenship in the Scandinavian country.

Those wanting to become Danish nationals will have to meet higher language requirements, and have been financially self-sufficient for the past four-and-a-half years, up from the current period of two-and-a-half years.

Applicants will also have to score better on a current affairs test than they did in the past.
RELATED TOPICS