Scores of Russians protest against Putin's involvement in Syria 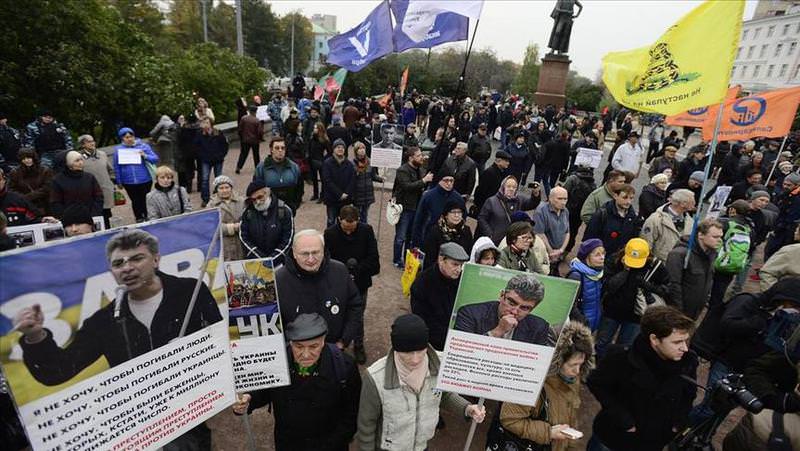 |AA Photo
by Daily Sabah with AA
Oct 17, 2015 12:00 am
Scores of Russians took to the streets in Moscow on Saturday to protest the government's intervention in Syria.

Nearly 200 people took part in the protest in Suvorov Square, chanting slogans against Russian President Vladimir Putin and Syrian President Bashar Assad: "This war is a shame on Russia," "If you want to start a war, declare it against corruption" and "Hell is waiting for those who love to bomb for peace."

The demonstrations have continued under strict security measures, an Anadolu Agency correspondent reported.

Russia began carrying out airstrikes in war-torn Syria on Sept. 30. According to the Kremlin, the strikes are aimed at supporting the Assad regime - an ally of Russia - against the Islamic State of Iraq and al-Sham (ISIS).

Turkey and the West accuse Russia of targeting moderate groups in Syria opposed to Assad, many of which are supported by Ankara and Washington. Moscow and Tehran have both been staunch allies of Assad since long before the beginning of the four-and-half year war.

At least 250,000 people have been killed since the beginning of the Syrian conflict in 2011, with 7.6 million internally displaced and over 4 million having fled to nearby countries.

According to a survey conducted by independent research agency Levada-Center in the third week of September, 39 percent of Russians approve of Moscow's support for the Syrian government.

Thirty percent of those who took part in the survey said they think Russia wants to protect its own interests in the Middle East by supporting Assad. Twenty-eight percent of responders hold that Moscow's ultimate objective is to fortify its leading position among world nations. About 22 percent said support for the Syrian government was launched in order to counter the Islamic State of Iraq and al-Sham (ISIS) terrorist group.
Last Update: Oct 18, 2015 2:50 pm