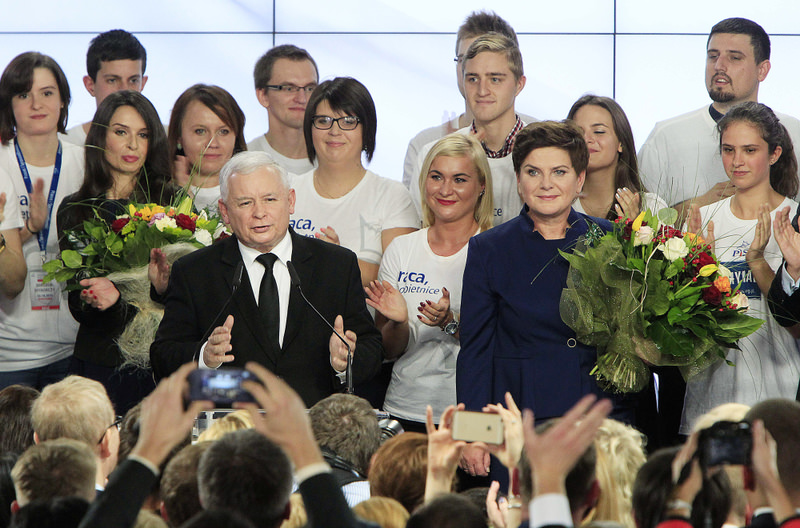 Conservative Law and Justice Party leader Jaroslaw Kaczynski (L) along with the Party's candidate for prime minister, Beata Szydlo (R) deliver a speech at the party's headquarters in Warsaw.
by Daily Sabah with Wires Oct 27, 2015 12:00 am

This weekend elections are held in nine countries around the world. Poland joined the European countries where support for hard-right parties has grown, with a eurosceptic party claiming victory in Sunday's elections

Poland's eurosceptic Law and Justice party (PiS) claimed victory on Sunday in a watershed election that risks putting the ex-communist state on a collision course with key European Union allies. This result also constituted another example in Europe of right-wing parties gaining popularity over the fear of a refugee influx.

According to the latest, but still unofficial, exit poll by IPSOS, PiS secured 37.7 percent of the vote, which gives the current main opposition party 232 seats in the 460-member lower house of parliament. PiS would consider a partnership with rock star Pawel Kukiz and his anti-establishment grouping if they fall short of a clear majority in the final results of Sunday's election, the party's likely candidate for defense minister said yesterday.

If the exit poll is correct, the victory for PiS would be the biggest in terms of seats by a single party since Poland held free elections after shedding communism in 1989 - marking a decisive swing to its brand of social conservatism mixed with left-leaning economics in the country of 38 million people. It would also be the first time that the socialist grouping that grew out of the pre-1989 communist party failed to win seats in parliament. A triumphant Kaczynski, whose party immediately signaled plans to reap new revenues from next year with a tax on bank assets, declared victory. "We will not kick those who have fallen ... We need to show that Polish public life can be different," Kaczynski told jubilant supporters at his party headquarters in central Warsaw.

Distrustful of the EU and an advocate of a strong NATO stance in dealing with Moscow, PiS opposes joining the euro zone any time soon and promises more welfare spending on the poor. It also wants to enshrine more Roman Catholic values in law, reflecting the party's deeply socially conservative stance. Two new parties appeared to have won seats in parliament. The liberal, pro-market Nowoczesna, led by former World Bank economist Ryszard Petru, was seen winning 7.7 percent of the vote.

The election of PiS likely means that Poland will join ranks with Hungary and Slovakia in opposing relocation of migrants from the Middle East and North Africa, deepening divisions in the EU, where Germany's Angela Merkel in particular has advocated a more open approach. Kaczynski, a long-time fan of Hungary's right-wing Prime Minister Viktor Orban, has said Muslim migrants threaten Poland's Catholic way of life. This month, he was accused by some media in Poland of fanning racism when he said they would bring new diseases and parasites to Poland.

The migrant crisis has led to a boost in support for hard-right parties in countries including Sweden and the Netherlands.

On the campaign trail, Kaczynski and other PiS leaders sought to tap into nationalist sentiment tied to fears over immigration, particularly among young voters. "The victory by PiS is part of a wider shift in Europe, of a return to national values," said analyst Aleksander Smolar.

PiS advocates a robust Western approach towards Russia, especially following Moscow's 2014 annexation of the Crimean peninsula in Poland's eastern neighbour Ukraine. That might complicate any future attempts at bridge-building between the EU and Russia, currently the target of Western sanctions imposed over the Ukraine conflict.

Markets have eyed the possible victory of PiS with growing concern in the final days ahead of the vote, with the zloty hitting a nine-month low. Economists said PiS plans to tax banks threatened the flow of cash into the economy, while welfare spending promises signaled less fiscal prudence. A senior PiS official said on Sunday the party wanted to tax banks' assets from next year. "One of the first economic decisions of the new government will be to submit an amendment of next year's budget," said Zbigniew Kuzmiuk, who is tipped to play a major role in shaping the new government's economic policies. "We want, probably as of January 2016, to introduce two taxes that are important for us, including a tax on banks - it will be a tax on assets with a rate of 0.39 percent - and a tax on supermarkets," he said. He said the government would be committed to maintaining an overall deficit below three percent of national output in line with EU guidelines.

PiS will also have a chance to nominate the majority of members of Poland's monetary policy council, giving the party de facto control over interest rate policy. Its top politicians have already signaled the grouping favored a more pro-growth approach.

What is at stake in elections around the world

In addition to Poland, the world witnessed elections in nine countries around the world this week. Here is what is at stake:

ARGENTINA: Argentines chose between continuity and a a financial overhaul when they voted for the successor to President Cristina Fernandez, a polarizing leader who dominated national politics for 12 years. Her chosen successor, Daniel Scioli, the governor of Buenos Aires province and a former vice president, and opposition rival Mauricio Macri are headed to a presidential runoff after neither received enough votes to win outright.

GUATEMALA: Comedian Jimmy Morales, a political neophyte, overwhelmingly beat center-left rival and former first lady Sandra Torres in a run-off vote despite his lack of government experience and some policy ideas that strike many as eccentric in a country where mass anti-corruption protests and newly aggressive prosecutors drove the last elected president and vice president from office.

HAITI: With more than 50 presidential candidates and no clear front-runner, a December runoff seems inevitable in the impoverished Caribbean nation. Final official results not expected until late November.

REPUBLIC OF CONGO: A constitutional referendum is being held to decide if the country's longtime president is eligible for a new term. Under current laws, 71-year-old President Denis Sassou N'Guesso is barred from seeking re-election when his second term expires next year. The referendum asks voters to change the constitution to scrap a two-term limit and 70-year-old age limit for candidates. Polls closed at 2 p.m. EDT (1800 GMT). Results could come by Friday.

TANZANIA: Tanzanians turn out in large numbers to vote in general elections in which the ruling party, in power for decades, faces a strong challenge from a united opposition. The ruling party candidate, John Magufuli, is battling a former prime minister, Edward Lowassa, who defected to the opposition earlier this year, in a presidential race many analysts say is too close to predict. Polls closed at 9 a.m. EDT (1300 GMT) on Sunday. Results expected within three to four days.

UKRAINE: Elections for local councils and mayors are seen as a test of strength for President Petro Poroshenko's government and the oligarchs accustomed to running regions of the country. Voting is not taking place in parts of eastern Ukraine controlled by Russia-backed rebels, and was scrapped at the last minute in Mariupol, a major port and steel city that rebels have been trying to capture for over a year. Polls closed at 2 p.m. EDT (1800 GMT).
RELATED TOPICS