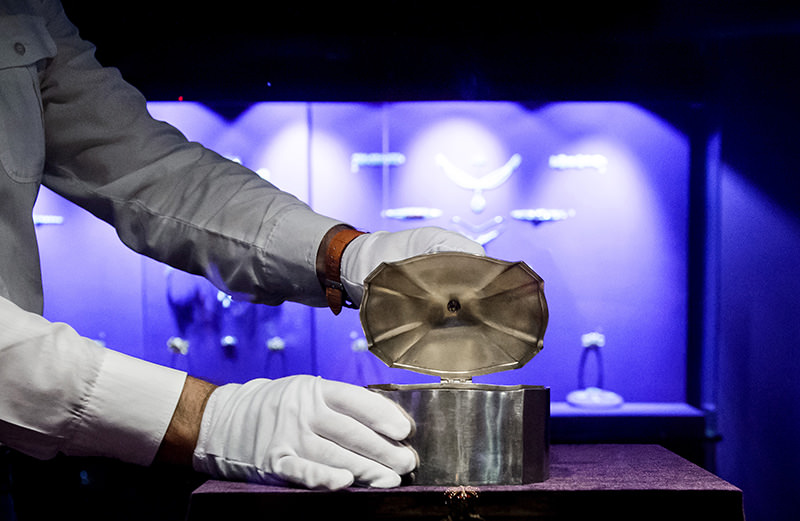 A museum employee poses for photographs with a silver casket used to transport the heart of Queen Marie (AP Photo)
by French Press Agency - AFP
Nov 03, 2015 12:00 am
The heart of British-born queen Marie of Romania was finally laid to rest on Tuesday after criss-crossing the nation for 77 years.

Encased in a small silver casket, the heart was brought to Pelisor Castle in the Carpathian Mountains and placed in the room where, in the former royal family's words, it "beat for the last time".

Marie's descendants were among those watching as the casket, draped in the British and Romanian flags, was carried out of the National History Museum in Bucharest by two soldiers, accompanied by eight officers on horseback, to the tune of both nations' anthems.

A crowd of several hundred watched as the heart of Marie, a grand-daughter of Britain's Queen Victoria, was carried in a procession along the wide Calea Victoriei boulevard before being transported by car to Pelisor, 120 kilometres (75 miles) north of the capital.

Her body was interred at the monastery in the town of Curtea de Arges, but she wanted her heart to be laid to rest in a specially built chapel in the Black Sea town of Balcic, which was home to the queen's favourite summer residence.

But the region was returned to Bulgaria in 1940 and the royal family was forced to move the heart to a temporary location in Bran castle in the Carpathian Mountains.

The chapel at Bran, however, was desecrated during Romania's communist period, forcing the heart to be moved again to the National History Museum.

It has stayed there since 1971, but the former royal family had asked for it to be transferred to somewhere with a royal connection.

Born in England in 1875 as Princess Marie of Edinburgh, her father was Prince Alfred, a son of Queen Victoria.