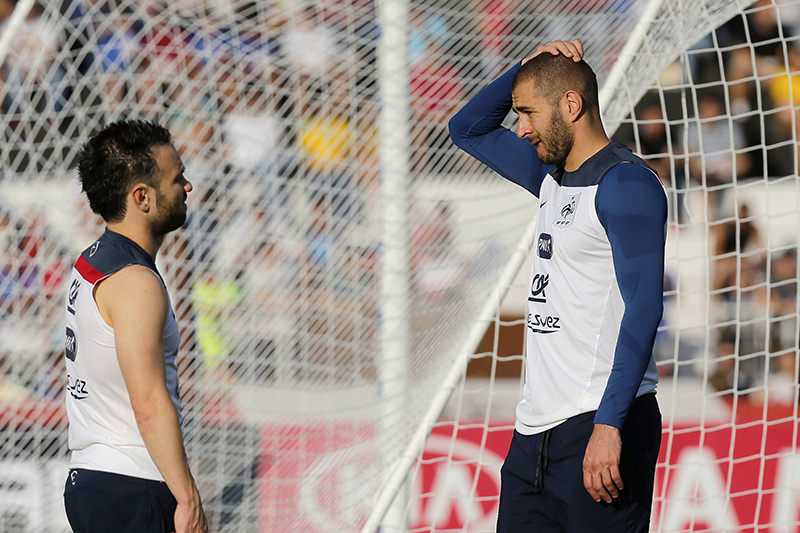 The Real Madrid and France star arrived with a hood pulled over his head at the police station in Versailles, near Paris, early Wednesday and was placed in detention, the local prosecutor confirmed.

Investigators are trying determine the extent of Benzema's involvement in a months-long attempt to extort money from fellow French international Valbuena after a sex tape found its way into the hands of suspected blackmailers.

According to the source, Benzema mentioned the intimate video to Valbuena when the French team met for training near Paris in early October, ahead of matches against Armenia and Denmark.

The star striker learned of the video from a friend of his brother in Lyon who had been contacted by the suspected blackmailers with a view to involving Benzema in their scheme, the source added.

Police are seeking to determine whether Benzema was just teasing Valbuena when he mentioned the tape, or trying to make him pay the group of suspected blackmailers, who were charged and put in detention last month.

It is not the first time the French striker has been embroiled in a police investigation.

In 2009, he and teammate Franck Ribery were accused of sleeping with an under-age prostitute, Zahia Dehar.

Both men were finally cleared of wrongdoing five years later, by which time Dehar had become a reality TV star and fashion designer.

The blackmail case began in June, when Valbuena lodged a complaint with police after being telephoned by an unknown person who said he had the sex tape.

The caller did not specify a sum of money but said they should come to an arrangement.

Police then took over, posing as Valbuena's business associate in later calls with the blackmailers, who threatened to release the video ahead of the 2016 European Championship, which France is hosting.

The investigation led them to three men, including one who was a close member of Valbuena's entourage and who had direct access to the footballer's phone containing the sex tape.

Two of the group are also said to have ties to Djibril Cisse, another French international and a former teammate of Valbuena at Marseilles, and successfully made him pay up for a sex tape in 2008.

The group used Cisse to authenticate the sex tape, the judicial source said, leading him to warn Valbuena that a video was circulating.
Cisse was detained for questioning last month but was quickly released without charge.

In a bid to speed up the negotiations, the blackmailers contacted the friend of Benzema's brother in Lyon, a man already known to police.

The friend was detained in relation to the blackmail case on Monday and was due to appear before a judge later Wednesday in Lyon.

Benzema, 27, is one of Real Madrid's star players alongside Cristiano Ronaldo and Gareth Bale. He started his career at Lyon, the club Valbuela joined this summer.
Last Update: Nov 04, 2015 4:36 pm