Pope recounts life growing up in Buenos Aires, says wanted to be butcher as a boy 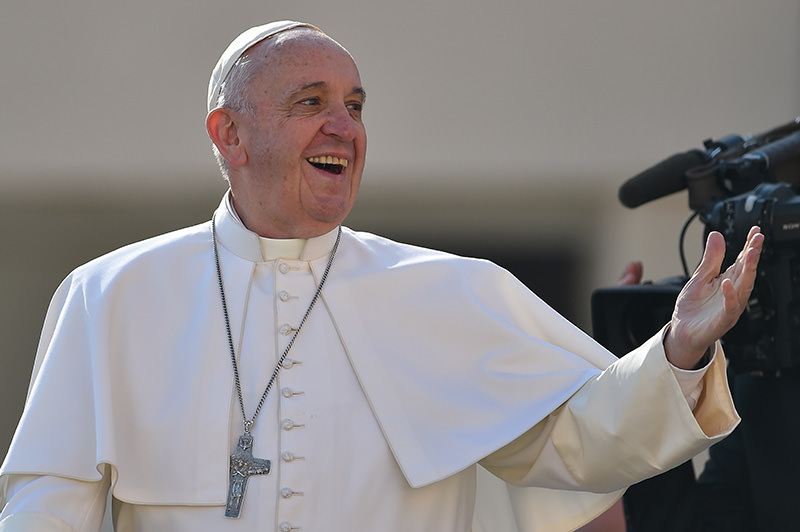 Pope Francis arrives for his weekly general audience at St Peter's square on November 4, 2015 at the Vatican (AFP photo)
by Nov 06, 2015 12:00 am
When he was still knee-high to a grasshopper, Pope Francis never dreamt of becoming the leader of the world's 1.3 billion Roman Catholics. His secret desire? To be a butcher.

"When I was little, there were no shops where they used to sell things," the pontiff said in an interview published Friday, as he recounted his life growing up in the Argentine capital, Buenos Aires.

"There was a market with a butcher and a fruit-seller. I used to go with my mother and my grandma to do the shopping. I was little, four years old. And they asked me 'What do you want to be when you grow up?' and I said 'butcher!'."

The revelation came during an interview with a Dutch paper, "Straatnieuws", sold by the homeless in the central city of Utrecht.

The pontiff, the first to grace the Vatican from Latin America, also confided that he missed being able to walk on the streets.

In his modest district of Buenos Aires, there was a small square where he played football, although with little success. "Those who played like I did were dubbed the hard potatoes. In other words, we had two left feet.

"But I would play, and often I'd be goalie."

It's been a tough week for the pontiff, after two people were arrested last weekend for allegedly leaking confidential documents revealing gross financial mismanagement at the Vatican.

The pope again explained why he had snubbed the grand official Papal Apartments with some 10 rooms, comparing it to "a funnel. It's big, but with a small door."

"It means isolating oneself. I thought I can't live there, it wouldn't be good for my mental health."

Instead, the pope chose to take up residence in a two-room flat in the Domus Sanctae Marthae residence, where he can receive visitors and eat with others in the canteen.

"Like that, the golden cage doesn't seem such a cage," said Francis, who also revealed that he "would love" to be able to go out for a pizza from time to time.

But he brushed aside his new-found celebrity, saying "I don't think about the fact that I'm famous."

"I tell myself, you have an important position now, but in 10 years time no-one will still recognise you," he added with a laugh.
Last Update: Nov 06, 2015 4:28 pm
RELATED TOPICS