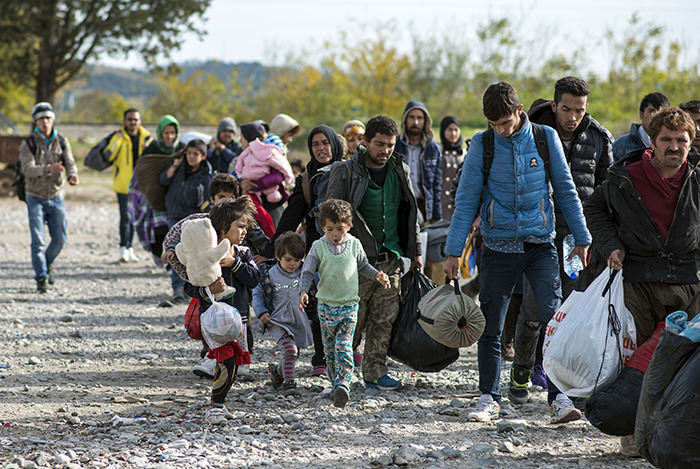 Migrants and refugees enter a registration camp after crossing the Greek-Macedonian border near Gevgelija on November 10, 2015 (AFP Photo)
by Daily Sabah with Wires Nov 10, 2015 12:00 am

Criticized for their slow response to the recent Syrian crisis, EU interior ministers pledged to deliver more quickly on their promises for dealing with the growing influx of refugees as winter approaches.

European Union interior ministers agreed on Monday to speed up the delivery of their promises to control the migration crisis before a humanitarian catastrophe erupts this winter.

Monday's meeting came ahead of a special EU-Africa summit that took place in Malta today. Summit participants discussed ways to reduce the flow of refugees transiting via Libya, the third-busiest migrant route after Turkey and the Balkans.

EU member states have come under fire from the European Commission, the EU's executive body, for taking too long to act on pledges to tighten external borders, set up centers to process migrants and relocate asylum seekers from overstretched Italy and Greece.

But EU interior ministers pledged to move faster on those fronts as well as accelerate the building of shelters up through the western Balkans route from Greece, where migrants often land after making the dangerous sea crossing from Turkey.

"The European Union has to do everything it can to avoid a humanitarian catastrophe as winter approaches," Luxembourg's Foreign Minister Jean Asselborn said at a press conference. "We have to try to save people at sea... and we can't allow people to die from hypothermia in the Balkans," continued Asselborn.

The European Commission proposed a multi-pronged plan in May to handle the worst migrant crisis in Europe since World War II after nearly 800 migrants drowned in the Mediterranean on their way to Italy via Libya. The crisis worsened over the summer when hundreds of thousands of people fleeing wars, persecution and poverty arrived in Greece and the Balkans via Turkey.

According to the International Organization for Migration (IOM), nearly 780,000 people have made the perilous journey across the Mediterranean this year so far and more than 3,400 have died or gone missing trying to reach Europe. However, EU states have bickered for months over plans for a joint solution, particularly over plans to relocate a total of 160,000 asylum seekers from frontline countries to other parts of the bloc.

The EU finally approved the relocation schemes last month in the face of fierce opposition from Hungary and other eastern member states grappling with an anti-immigrant backlash. But since then only 147 asylum seekers have been relocated from Italy and Greece to countries like Sweden and Luxembourg, Asselborn said. The EU ministers agreed "that all participating member states will speed up the relocation process."

The ministers also sought to pave the way for relocations by intensifying efforts to set up centers in Greece and Italy that separate asylum seekers from economic migrants, whom will be told to return to their countries of origin.

Per previous EU agreements, the handful of so-called hotspots must be up and running by the end of November. But hotspots alone will not be able to manage the sheer numbers of migrants, with 10,000 people sometimes arriving in Greece in just one day, Asselborn conceded.

The ministers therefore agreed "to explore the concept of processing centers" that Asselborn said could be set up in Balkan countries both inside and outside the EU to separate asylum seekers from refugees.

But he admitted there was "no magic recipe" to reducing the flows and ending the chaos that has sown tensions through the Balkans. Support for admitting migrants appears to have decreased in both Germany and Sweden, the most welcoming countries in Europe, as the numbers of arrivals have risen.

The gathering of more than 50 leaders from both the EU and Africa in Malta today and tomorrow will see an overwhelmed Europe call on Africa to take back economic migrants. In return, Europe will offer up to 3.6 billion euros in development funds to help combat the wars and poverty in Africa, which are among the root causes of the heavy migration flow.

A couple of political leaders in the European Parliament – conservative Manfred Weber, socialist Gianni Pittella and liberal Guy Verhofstadt – sent an open letter to the bloc's leaders urging for an agreement to be reached over a joint approach toward asylum seekers and migration during the Valletta summit.

The majority of migrants come from the Middle East and Africa. The turmoil in the Middle East and the five-year war in Syria have led many people to flee the conflict in an attempt to seek security and shelter in a more prosperous and peaceful country, such as one in Europe. However, Europe has been slammed for lacking a collaborative response to the crisis
Last Update: Nov 10, 2015 2:43 pm
RELATED TOPICS