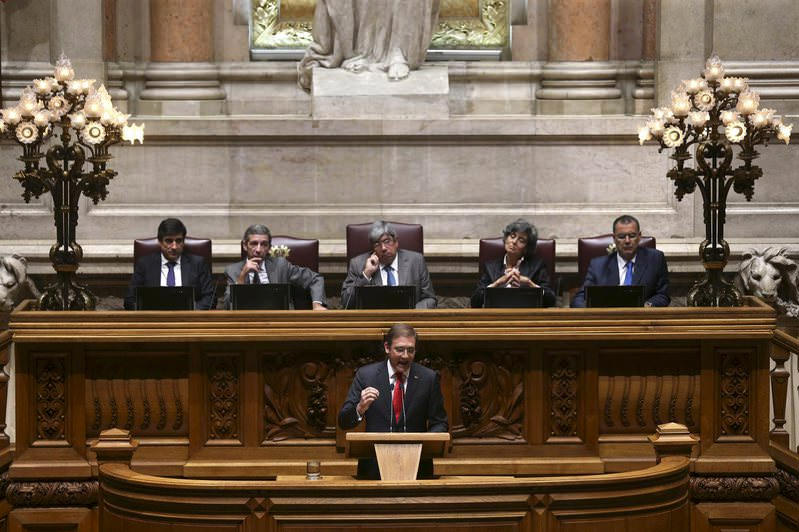 by Associated Press
Nov 10, 2015 12:00 am
Anti-austerity lawmakers forced Portugal's new center-right government to resign Tuesday by rejecting its policy proposals for what was supposed to be a four-year term in office.

The showdown came less than two weeks after the center-right government was sworn in.

The moderate Socialist Party forged an unprecedented alliance with the Communist Party and the radical Left Bloc to get a 122-seat majority in the 230-seat Parliament and vote down the proposals. The defeat brought the government's automatic resignation.

After four years in power the government lost its parliamentary majority in an Oct. 4 general election, which saw a public backlash against austerity measures adopted following a 78 billion-euro ($84 billion) bailout in 2011.

Socialist leader Antonio Costa is expected to become prime minister in coming weeks, supported by the Communists and Left Bloc. They have promised to alleviate austerity, though critics fear a return to borrow-and-spend policies.

The leftist alliance intends to reverse cuts in pay, pensions and public services, as well as tax increases that have brought widespread hardship, street protests and strikes in recent years.

Outside Parliament, demonstrators at an anti-austerity protest by labor groups shouted "Victory!" as the news of the vote spread.

The current political upheaval has its roots in years of low growth and borrow-and-spend policies which weakened Portugal and compelled it to ask for the 2011 bailout amid the eurozone's debt crisis. The center-right government introduced debt-reducing austerity measures demanded by creditors.

The government's collapse was a political setback for the 19-nation bloc's austerity strategy demanded by Germany and the others as a remedy for the crisis. Eurozone leaders pointed to Portugal, and Ireland, as examples of how austerity paid off. Now, the progress Portugal made is in doubt, and some fear the country could go down the same road as Greece, which has needed three bailouts since 2010.
Last Update: Nov 10, 2015 9:38 pm