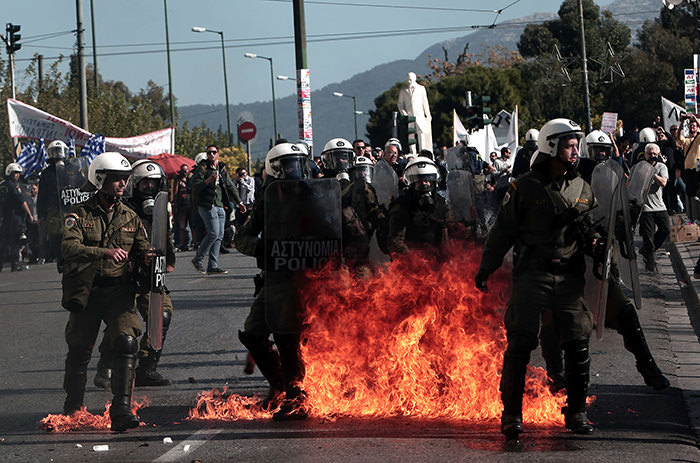 Greek police stand guard amid molotov cocktails thrown by protesters during a massive demonstration as part of a 24-hour general strike in Athens on November 12, 2015 (AFP Photo)
by Associated Press Nov 12, 2015 12:00 am
Clashes broke out Thursday between riot police and protesters in central Athens during the first general strike since the country's left-led government initially came to power in January.

Youths broke away from a protest march by thousands as it passed outside parliament and threw Molotov cocktails at police who responded with tear gas and stun grenades. Demonstrators scattered, but calm returned within the hour.

Nearly 25,000 people participated in three separate demonstrations in central Athens, according to police figures, to protest a new round of bailout-related tax hikes and spending cuts. Another 10,000 marched without incident through the country's second largest city of Thessaloniki.

The Athens metro and suburban railway shut down while bus, trolley and train routes were reduced and ferries remained tied up in port, severing connections between islands and the mainland. More than a dozen domestic flights were cancelled.

The strike closed museums and archaeological sites, including the Acropolis, as well as state schools and pharmacies. Hospitals were functioning with emergency staff, while many privately owned shops also shut down.

The party's labor policy department called for mass participation to protest "the neoliberal policies and the blackmail from financial and political centers within and outside Greece."

Journalists also walked off the job, pulling news bulletins off the air except to report on the strike. News websites were not being updated, while no Friday newspapers were to be printed. Lawyers, too, were scaling back their work.

"They've deprived every Greek of hope for the future," said Katerina Kassimati, who works at a municipal preschool and was among the protesters. "We're of a certain age. The children that are left behind have no future."

Workers were protesting austerity measures imposed as part of Greece's third bailout a three-year deal under which Greece will gradually receive up to 86 billion euros ($92 billion) in rescue loans from its partners in the 19-country eurozone in return for passing a raft of spending cuts and tax hikes.

Tsipras, who won re-election in September, signed up to the bailout in a dramatic policy change despite initially campaigning vigorously against bailouts and their accompanying austerity conditions. He has said he had no choice but to agree to the deal to prevent Greece from defaulting on its debts and being forced out of Europe's joint currency.

The government is currently locked in negotiations to reach an agreement on the disbursement of a 2 billion-euro installment ($2.2 billion), as well as 10 billion euros set aside for the recapitalization of its banks.

While Greece has met many of the requirements, it remains at odds with creditors over how to deal with non-performing loans and the repossession of homes whose owners have fallen into arrears on mortgage payments.
Last Update: Nov 12, 2015 10:43 pm
RELATED TOPICS