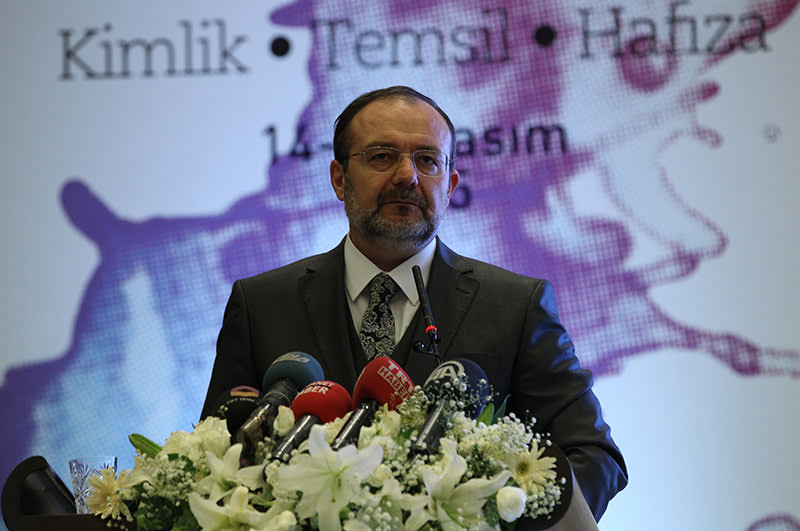 by Daily Sabah with AFP
Nov 14, 2015 12:00 am
Following the deadly attacks in French capital Paris that killed 127 people, Muslim clerics condemned the attacks and defied their assailant, ISIS terror organization, for crimes against humanity and Islam.

Mehmet Görmez, the head of Turkey's Presidency of Religious Affairs offered his condolences to France and whole humanity. "The humanity has witnessed tonight that the horror, violence that we witness in this geography almost each day. I would like to express that such attacks have not been carried against a single country, region or continent, but the whole humanity which accepts peace as a value and dignifies humanitarian values on earth" Görmez said. "I pray as 'may our Almighty Lord protect all humanity from such evil'."

"Respect to Allah, loyalty to a community and affiliation with a religion is out of the question for the assailants, the guides and the ones who openly use these people as a tool taking part in these inhumane attacks. But as a Muslim and the head of an institution which carries out religious services, I would like to express another issue. I think it is much worse to defame a religion that brought grace, a prophet and believers of that religion through atrocities and terror goals of such terror networks" Görmez added. An identity which tries to destroys all other identities using religion as a pretext is itself against religion and Allah's will, Görmez said.

Meanwhile the head of Sunni Islam's leading seat of learning, Cairo's Al-Azhar, on Saturday condemned "hateful" attacks in Paris that killed more than 120 people and urged global unity against extremism.

"We denounce this hateful incident," Ahmed al-Tayyeb told a conference in comments broadcast by Egyptian state television. "The time has come for the world to unite to confront this monster."

"Such acts are contrary to all religious, humanitarian and civilized principles," Tayyeb said at the opening of the conference in the southern city of Luxor focused on combating "extremist thought".

Prominent academic renowned for his Islamic studies, Tariq Ramadan, said that a united front should be established against such without alienating or radicalizing French Muslims through a post published on his Facebook page. "The right reaction in France would be to join forces, to set a united front. A true united front with the government and all the institutions eventually understanding that the French Muslim citizens are truly part of it: they are not those alien "objects of analysis." Finally the problem of the fractured national unity is deep and it is upstream of the attacks that, together, we need more work and education. To build together the future and not to react to tragedies. A united front also means the refusal, in the short and long term, of the political instrumentalization of these heinous attacks. This would be a victory, but alas, we already hear the whispers of predatory voices proving that, on this front, the defeat is consumed" Ramadan said, while offering his condolences to the families and friends of the victims.

He pointed out to the paradoxical stance of the terrorists claiming that they kill in the name of God. "Absolute and immediate condemnation. They shouted, we are told, "Allahu akbar" (God [is] the greatest) to support and justify their inhuman actions. With this they told a lie and a truth. Their lie is related to Islam and its message as not even one of its teachings, ever, can justify their actions. These acts are the result of the minds inhabited by the worst, or minds without minds, manipulated or manipulators. The truth is that God, yes, in His grace, His love and His compassion is greater than their killing madness and that Islam will never end up being equated or amalgamated with their extremist violence" Ramadan said.
Last Update: Nov 14, 2015 1:44 pm