Schengen may collapse between German and Swedish borders 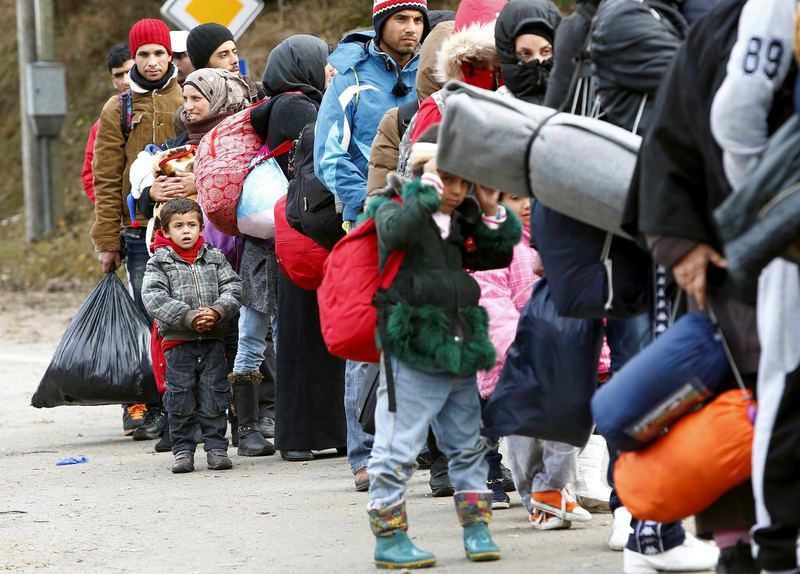 Migrants stand in a queue before passing through the Austrian-German border from Austria.
by Daily Sabah with Wires
Nov 14, 2015 12:00 am

The European Commission has formally authorized the temporary reposition of border controls by Sweden and Germany's extension of frontier checks to help get a grip on a large influx of asylum seekers, the EU executive said on Friday. With refugees flooding into European Union territory in the worst migrant crisis since World War Two, the viability of the EU's Schengen system of open borders is under strain as never before as EU members reintroduce controls at their frontiers. Sweden, long a haven for people fleeing war and persecution, was the latest EU state to re-establish checks at its borders to stem a tide of migrants coming from Denmark. Germany re-imposed border controls on Sept. 13 and decided to extend them beyond an initial limit of two months foreseen by Schengen rules, using a clause that permits stretching checks to a maximum of six months. "The temporary reintroduction of border controls between member states is an exceptional possibility explicitly foreseen in and regulated by the Schengen Borders Code, in case of a serious threat to public policy or internal security," the European Commission said in a statement. The Swedish decision "prima facie appears to be a situation covered by the rules", it said. The decision replicated similar provisional authorizations granted by the EU executive to Austria, Hungary and Slovenia when they imposed temporary border controls in recent weeks.

The Europeans quickly huddled after the summit for informal talks about how to cope with their biggest refugee emergency in decades. The bloc estimates that up to 3 million more people could arrive in Europe seeking sanctuary or jobs by 2017. Austria's government has for now put aside plans to build a fence along a stretch of its border with Slovenia but says it is keeping such an option open. Although Hungary and Slovenia object the idea, Austria said a fence may be erected within 48 hours. "The Dublin system is dead," Hungarian Foreign Minister Peter Szijjart told the state news agency MTI on Wednesday, referring to the regulation, which requires asylum seekers to be processed in the first EU member state they arrive in. "If anyone leaves from Syria toward Europe it is physically impossible for them to enter the European Union in Hungary. Therefore it is not justified to send any Syrians back to Hungary," he said. Hungarian Prime Minister Viktor Orban called migration a "lose-lose" phenomenon. "The solution is to have people have a decent life in the country where they were born. It's impossible to do without money," he told reporters at the Malta summit.

Tensions were also high yesterday in the Balkans, as Slovenia continued to erect a razor-wire fence on its border with Croatia to hold back the migrant influx. Croatian Interior Minister Ranko Ostojic claimed Wednesday to domestic paper Vecernji List that Slovenian police entered Croatian territory while constructing the barrier and intended to control the flow of migrants on the frontier. The two countries have a long-standing territorial dispute dating back to the wars in Yugoslavia in the 1990s, and Croatia believes the border fence is encroaching on its soil. Their leaders also met yesterday to try to calm the row. Slovenia said it was being overwhelmed by the arrival of more than 180,000 asylum-seekers moving toward Western Europe since mid-October. Germany has been another country which brought back border controls in September, in what amounted to a de-facto suspension of its Schengen membership. Austria has also said it will take border measures to help control the influx. The Schengen travel zone involves 30 nations, including some not in the European Union.

The majority of migrants come from the Middle East and Africa. The turmoil in the Middle East and the five-year war in Syria have led many people to flee the conflict in an attempt to seek security and shelter in more prosperous and peaceful countries. However, Europe has long been slammed for lacking a collaborative response to the crisis. According to the UN, more than 750,000 people have reached Europe so far.