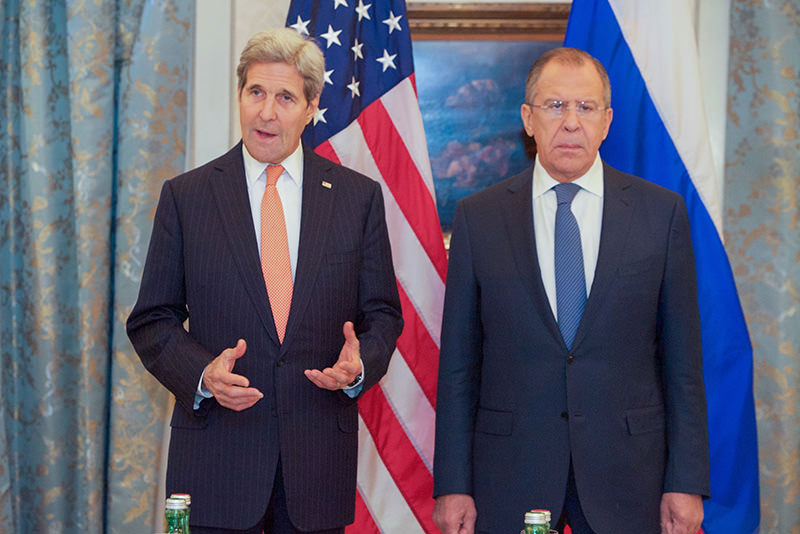 Speaking in Vienna at the foreign ministers meeting on Syria, Kerry said that there is still no agreement on the future of President Bashar al-Assad despite concrete progress in talks on ending the Syrian civil war.

Kerry told a news conference after talks in Vienna that the five permanent members of the U.N. Security Council also agreed to pass a resolution in favor of a ceasefire in Syria.

Meanwhile, Kerry said that he had no reason to disbelieve claims by ISIS extremists that they were behind the Paris attacks.

"Daesh (ISIS) has claimed it is behind this... We have seen nothing to lead us to a different conclusion," Kerry said in French after talks on the Syrian war in Vienna.

Germany's Foreign Minister Frank-Walter Steinmeier also said that there will be efforts to create a new constitution for the war-torn country and attempts to create a transitional government within 18 months.

Steinmeier spoke at the end of a daylong meeting of nearly 20 countries represented by foreign ministers and their deputies seeking to end Syria's war.

Russian Foreign Minister Sergey Lavrov, standing next to Kerry, said there was "no justification for terrorist acts, and no justification for us not doing much more to defeat ISIS and al-Nusra and the like," adding: "I hope that this meeting as well would allow us to move forward."

Secretary-General Ban Ki-moon urged ministers "to move beyond their differences on Syria" and work on a negotiated end to the war.

Ahead of the meeting, French Foreign Minister Laurent Fabius said the attacks in Paris made it all the more necessary for the international community to find a common approach in Syria and terrorism, sentiments echoed by the foreign ministers of Germany, Jordan and Saudi Arabia.

Iranian Foreign Minister Mohammad Javad Zarif told Iranian state TV Saturday that the attacks in Paris show the urgency of fighting terrorism and extremism on a global level. He joined the talks later in the day.

Jordan's foreign minister, Nasser Judeh, said the Paris attack "reaffirms our collective commitment" to fight terror and extremism wherever it may occur, while EU foreign policy chief Federica Mogherini said no one could turn away from the common threat.

"We are together in this: Europeans, Arabs, East and West, all the international community," she declared. "The best response to this is actually coming together, overcoming our differences, and trying together to lead the way towards peace in Syria."

More than 250,000 people have been killed in the Syrian war. Eleven million have been uprooted from their homes. The conflict has allowed ISIS terrorists to carve out significant parts of Syria and Iraq for their would-be caliphate. Europe and Syria's neighbors, meanwhile, are struggling to cope with the worst migrant crisis since World War II.