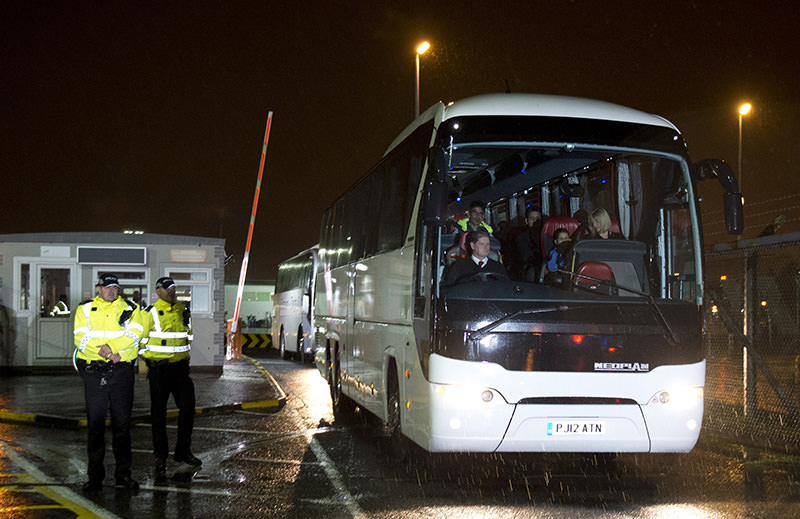 Syrian refugees are driven away in a convoy of buses after landing at Glasgow airport, Scotland on November 17, 2015 (AFP Photo)
by Anadolu Agency Nov 17, 2015 12:00 am
The first flight carrying Syrian refugees to be resettled in the United Kingdom landed in Scotland on Tuesday.

Around 100 people are thought to have arrived at Glasgow Airport from refugee camps in Lebanon and Jordan on an aircraft chartered by the U.K. government. They will be housed by local authorities around Scotland.

Richard Harrington, the minister responsible for Syrian refugees, said it was a "landmark moment".

He added: "These vulnerable people will now have the chance to rebuild their lives in safe and secure surroundings, among supportive communities in the U.K.

"Over the coming weeks, we will provide refuge to hundreds more people who have been forced from their homes because of civil unrest, persecution and war."

Humza Yousaf, the Scottish Government's minister for Europe and international development, said it was a "proud day for Scotland".

"I would like to extend the warmest of welcomes on behalf of the people of Scotland to the refugees who arrived in our beautiful country today and wish them all the best as they start their new lives here."

The British government has not joined an EU program to resettle migrants entering southern Europe, instead pledging to accept 20,000 refugees from camps bordering Syria, including Turkey.

Home Secretary Theresa May has said the refugees will be "double screened" by the UN High Commissioner for Refugees and British authorities.

"We are ensuring that we are checking people who are coming into the U.K.," she said in a BBC TV interview Sunday.