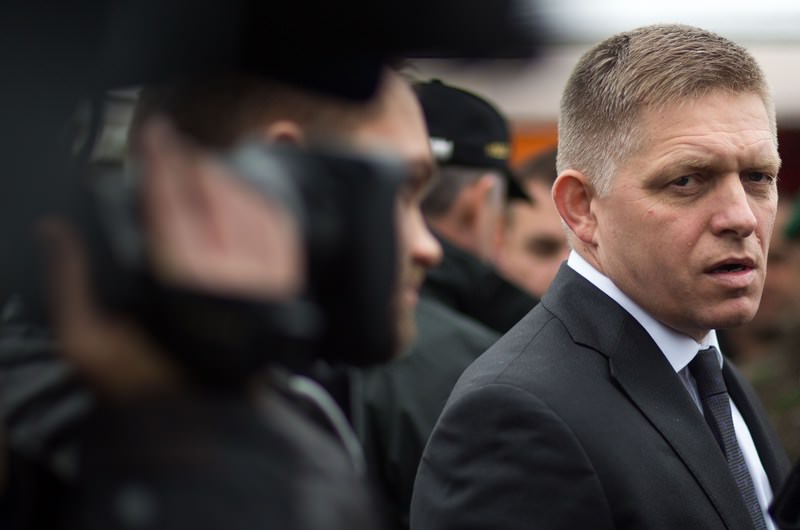 by Daily Sabah with Reuters
Nov 17, 2015 12:00 am
Slovak Prime Minister Robert Fico pointed to Muslims in his country as a "potential threat" on Monday and said his government was "monitoring" its community in the wake of the Paris attacks.

Slovak officials joined Poland at the weekend in pouring cold water on an EU plan to share out thousands seeking asylum in Europe, many of them Muslim, saying the violence in Paris underlined their concerns about taking in refugees.

Fico, who is running for re-election in March, has strongly opposed refugee quotas from the start.

"With the exception of Norway's (Anders Behring) Breivik mass shooting, virtually every time there has been a terrorist attack representatives of the Muslims were responsible, therefore if we have these people staying in Slovakia legally it's our duty to verify whether they have contacts with problematic persons," Fico told reporters.

"Whoever wants to be a human rights activist should go to a human rights conference. This is about security," he said at Bratislava's French embassy, where he observed a minute of silence for the victims of Friday's attacks.

When asked in a separate television interview what specific measures his government was taking, he said: "We are monitoring every Muslim in our territory, we have increased monitoring of a refugee camp and detainment camps, as well as monitoring of far-right extremists."

Fico sparked criticism earlier this year when he said Slovakia would prefer to accept Christian refugees under the resettlement plan. There are some 5,000 Muslims living in a population of 5.4 million but Islam is not officially registered as religion in Slovakia and there are no official mosques.

The Islamic Foundation of Slovakia criticised Fico for singling out Muslims as a threat.

"Fico did not say they were monitoring every radical or extremist," the group's spokesman said. "Rather he hinted that some of Slovakia's citizens, without any court ruling or police accusation, represent a threat because of their religion."
Last Update: Nov 17, 2015 2:24 am