Muslims and refugees face backlash in the wake of Paris attacks 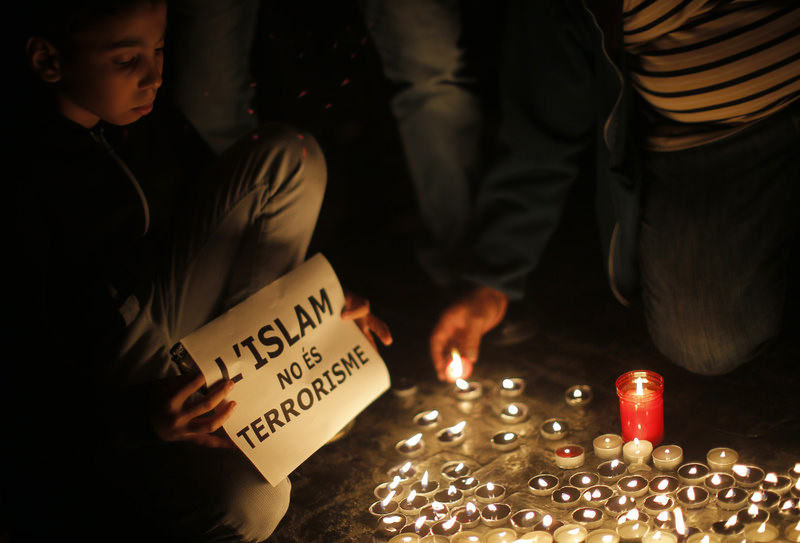 A boy holds a banner reading in Catalan: ,Islam is not terrorism,, during a demonstration, called by the IBN Battuta Foundation on behalf of the Muslim community to show solidarity with the victims of the terror attacks of Paris.
by Daily Sabah with Wires Nov 18, 2015 12:00 am

Amid shock and mourning after the Paris terrorist attacks, refugees and Muslims in Europe expressed fear of repercussions.Several leaders already lashed out at their Muslim communities and some threatened to bar Syrian refugees from their states

Muslims in France now find themselves under a disturbing spotlight for the second time this year. Many fear they will face public discrimination after the most recent Paris terror attacks last weekend, which left 132 people dead and 352 wounded. Muslim community leaders across Europe immediately denounced the massacre and hundreds of Muslims emphasized that DAESH represents neither them nor their religion, yet there is still widespread concern that they could be targeted in retaliatory and discriminatory practices by xenophobic elements within the country or in the rest of Europe.

Witnessing a rising anti-Islamic sentiment since last January's attacks on Charlie Hebdo and at a kosher grocery store, which together killed 17, France is now expected to see a spike in anti-Muslim activities. According to Al Jazeera, the French National Observatory Against Islamophobia said "there have been 116 anti-Muslim attacks in the country since Friday's attacks."

Meanwhile, hundreds of Muslims have used social media to show support for Parisians and that the terrorists and attacks are not a part of Islam with the hashtags #NotInMyName and #IAmAMuslim.

French Muslims are not the only group who fear they may face threats, harassment and discrimination. Syrian refugees, who have been seeking a safe shelter mostly in Europe, but also in North America, face backlash over the attacks because of their religion.

A number of U.S. governors on Monday threatened to bar Syrian refugees from their states following the deadly attacks in Paris. Nearly half of the 50 U.S. states moved Monday to shut the door on Syrian refugees as Republican lawmakers urged a halt to the resettlement program, citing security fears following the Paris attacks. Those include the governors of Alabama, Arkansas, Arizona, Florida, Georgia, Illinois, Indiana, Kansas, Louisiana, Massachusetts, Michigan, Mississippi, Nebraska, New Hampshire, North Carolina, Ohio, Tennessee, Texas and Wisconsin. In Louisiana, Gov. Bobby Jindal, who is eyeing the Oval Office, became the first to announce his opposition when he tweeted Monday that he issued an executive order "instructing state agencies to take all available steps to stop the relocation of Syrian refugees to" his home state. Ohio Gov. John Kasich, who has struck an unusually centric tone during successive Republican presidential debates, announced via his spokesman that he, too, opposes the resettlement of Syrian refugees within Ohio's borders, citing security concerns.

President Barack Obama pushed back, criticizing "shameful" calls to screen the refugees fleeing the war-torn country based on their religion. Obama, speaking Monday at a Turkey summit of the world's top economies, said it is "very important... that we do not close our hearts to these victims" of violence in the Middle East. Obama announced in September that he planned to accept at least 10,000 Syrian refuges by the end of October 2016.

The Council on American-Islamic Relations, a Muslim civil rights group, called the governors' comments and recommendations "un-American," adding that rejecting refugees projects "our fears to the world." "Governors who reject those fleeing war and persecution abandon our ideals and instead project our fears to the world," CAIR said. Speaking to Al Jazeera, Ibrahim Hooper, national communications director of CAIR, said this is a "non-issue" as refugees are already checked thoroughly by US authorities before entering the country.

Suzanne Akhras Sahloul, director of the Syrian Community Network which helps refugees adjust to American life, warned of growing "Islamophobia" in the country. "What happened to us that we are now closing our doors to people who are escaping terrorism, trauma and death?" she told AFP.

Europe's populist right also rushed to demand an end to an influx of refugees from the Middle East in the wake of the attacks.

Slovak Prime Minister Robert Fico pointed to Muslims in his country as a potential threat on Monday and said his government was "monitoring" its community in the wake of the Paris attacks. Slovak officials joined Poland at the weekend in pouring cold water on an EU plan to share thousands seeking asylum in Europe, many of them Muslim, saying the violence in Paris underlined their concerns about taking in refugees.

Fico sparked criticism earlier this year when he said Slovakia would prefer to accept Christian refugees under the resettlement plan. There are some 5,000 Muslims living among a population of 5.4 million but Islam is not officially registered as religion in Slovakia and there are no official mosques. The Islamic Foundation of Slovakia criticized Fico for singling out Muslims as a threat.

France's 5 million Muslims saw how easily the link is made after attacks in January that killed 17 people at the satirical magazine Charlie Hebdo and a kosher supermarket. Saphirnews, a Muslim news website, reported on Sunday that French Muslims were once again becoming "collateral victims of terrorism." Early on Saturday morning, blood-red crosses were found painted on the wall of a mosque in eastern Paris, it said. The slogan "France, wake up!" was daubed on the wall of a mosque in southern France and "Death to Muslims" was written on walls around Evreux north of Paris, Le Parisien daily reported.
RELATED TOPICS