State of emergency may last months, more raids carried out in France 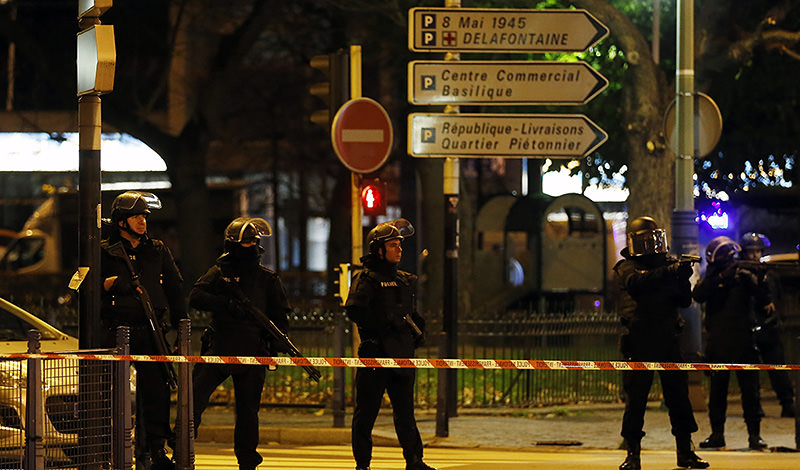 French police have found the suspected attack mastermind amid heavy gunfire and multiple explosions after storming a Paris apartment. Meanwhile, Hollande asked parliament to examine a bill extending the state of emergency to three months

French President François Hollande said on Wednesday that parliament would this week begin examining a bill extending the state of emergency by three months. "I decided to ask parliament starting Wednesday to examine a bill prolonging the state of emergency for three months," he told a rare joint sitting of both houses of parliament, calling on lawmakers to "adopt it by the end of the week" after the worst attacks in French history.

He also called for the French constitution to be amended to "allow the authorities to act... against war-level terrorism." The bill includes a measure that enables authorities to close "any association or gathering," which notably includes mosques and community groups that would encourage people to carry out terrorist acts.

A woman wearing an explosive suicide vest blew herself up, and a suspected extremist was killed on Wednesday, as heavily armed police tried to storm a suburban Paris apartment where the suspected mastermind of last week's rampage was believed to be holed up, police said.

Gunfire and explosions rocked the Saint-Denis area in the north of the capital near the Stade de France stadium before dawn, as terrified residents were evacuated or told to stay in their homes.

Authorities arrested seven people, while five police officers suffered minor injuries in the operation that turned into a seven-hour standoff between security forces and a group of people holed up in an apartment. Gunfire first rang out around 4:00 a.m. on the streets close to where three suicide bombers had detonated their explosives outside the stadium at the start of Friday's attacks.

Paris prosecutor Francois Molins said telephone surveillance and witness reports "led us to believe" that Abdelhamid Abaaoud, the suspected mastermind of Friday's series of attacks in Paris that killed 129 people, was in the apartment. However, authorities could not immediately confirm whether Abaaoud was killed or arrested during on Wednesday's raids. Abaaoud is a DAESH militant who was previously thought to be in Syria after fleeing raids in his native Belgium earlier this year.

Speaking at the scene of on Wednesday's raid, Molins said the operation began with a pre-dawn shootout and resulted in the capture of three people inside the apartment, the death of a woman who set off an explosive charge, and the death of "another terrorist who was found at the end of the operation who was hit by projectiles and grenades." "As things stand, it is impossible to give you the identities of the people detained, which are being verified," Molins said.

Residents of the Paris suburb, some of whom were evacuated in their underwear, said they had been caught in a terrifying exchange of fire.

Hayat, 26, had been leaving a friend's apartment where she had spent the night when the shots erupted. "I heard gunfire," she said. "I could have been hit by a bullet. I never thought terrorists could have hid here." The raid came after footage from the scene of one of the Paris attack sites revealed a ninth suspect might have taken part. It is known that seven were killed in the carnage on Friday, most after detonating suicide belts. It was not clear if the ninth man was one of two suspected accomplices detained in Belgium or was still on the run, potentially with 26-year-old fugitive Frenchman Salah Abdeslam who took part in the attacks with his suicide-bomber brother Brahim.

Police also carried out multiple raids in southwest France. The operations were part of an anti-terrorism strategy but not directly linked to the Paris attacks, an investigator said. As police stepped up the hunt for the fugitives, French and Russian jets pounded DAESH targets in the group's Syrian stronghold of Raqqa for a third consecutive day.

A monitoring group said the French and Russian air strikes had killed at least 33 DAESH extremists in the last 72 hours. In a sign of the nervousness gripping Europe after Friday's carnage, a football match between Germany and the Netherlands in Hanover was cancelled Tuesday and the crowd evacuated after police acted on a "serious" bomb threat.

The body representing Muslims in France said it would ask all 2,500 mosques in the country to condemn "all forms of violence or terrorism" in prayers this Friday. The message will condemn such acts "unambiguously," the French Muslim Council (CFCM) said.

Meanwhile, All 129 fatalities in last week's Paris attacks have now been identified but dozens of other casualties remain in critical condition, a statement from the French cabinet said on Wednesday. "All of the 129 dead victims have been identified," said the statement issued after the weekly cabinet meeting. A total of 221 people remain hospitalized, dozens of them seriously hurt.

French President Francois Hollande held an emergency meeting with senior ministers at the Elysee Palace to monitor the raid. Last Friday, France was hit by its worst terror attack since World War II. At least 129 people died, and more than 350 were wounded, with dozens still in critical condition. After the attack, France imposed strict security measures. A national state of emergency was announced, thousands of troops were deployed, tourist sites have been closed down, and dozens of suspects have been detained.
Last Update: Nov 18, 2015 4:38 pm