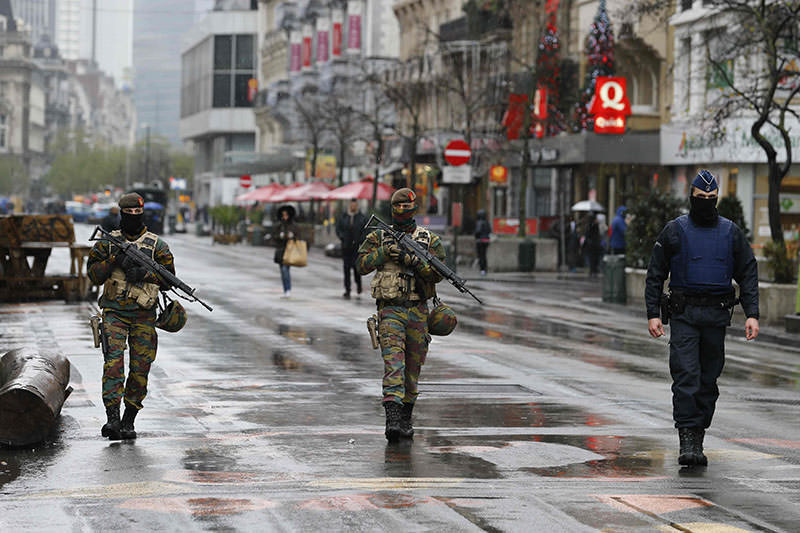 Belgian soldiers and a police officer patrol in central Brussels, November 21, 2015, after security was tightened in Belgium following the fatal attacks in Paris (Reuters)
by Anadolu Agency Nov 21, 2015 12:00 am
Belgium raised the terror alert in capital Brussels to the highest level Saturday as the prime minister warned of an imminent threat.

The city's subway system was closed and heavily armed police and soldiers patrolled the streets just over a week after more than 130 were killed in gun and bomb attacks in Paris. Many of the Paris attackers lived in Belgium, including one who is still at large.

Prime Minister Charles Michel said the threat level was raised to level four due to "quite precise information about the risk of an attack like the one that happened in Paris" and warned that "several individuals with arms and explosives could launch an attack, perhaps even in several places at the same time."

Speaking at a news conference in Brussels, he urged the public to remain calm.

In a statement, OCAM urged people to stay away from crowded areas, including concert venues and public transport.

As well as Belgian Abdelhamid Abaaoud, the suspected organizer of the attacks in Paris who was killed in a police raid on Wednesday, several of the militants lived in Brussels, including Salah Abdeslam, who was last seen heading for the Belgium border hours after the attacks.

There have been a series of anti-terror raids around the capital, focused on the Molenbeek neighborhood.

According to a 2014 UN report, Belgium has the highest per capita number of fighters in Syria and Iraq of all European nations.
Last Update: Nov 21, 2015 1:15 pm
RELATED TOPICS