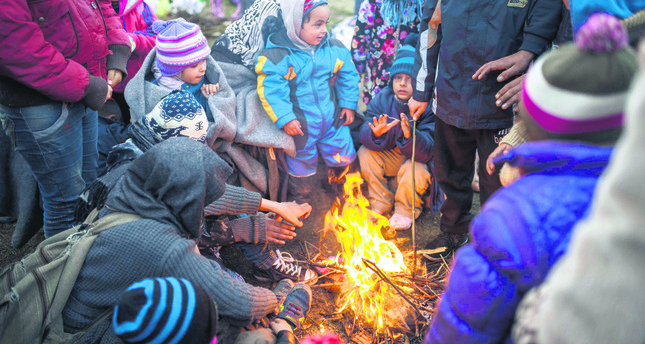 Refugees and migrants keep warm around a bonfire outside the registration and transit camp near Gevegelija, The Former Yugoslav Republic of Macedonia.
by Daily Sabah with Wires Nov 21, 2015 12:00 am

Holding an emergency meeting after the Paris terror attacks, EU ministers agreed to tighten checks on all travelers even from EU member states ın the passport-free Schengen area

Many refugees fear they may be stuck in limbo as winter sets in as EU member states agreed on Friday to immediately tighten checks on all travelers, including EU nationals, at the external borders of the passport-free Schengen area following the Paris attacks, EU sources said.

Interior ministers from the 28-nation EU holding an emergency meeting in Brussels also backed France's call for a fundamental revision to the Schengen deal to allow the "systematic" controlling of EU citizens at borders, the sources said. "Member states undertake to implement immediately the necessary systematic and coordinated checks at external borders, including on individuals enjoying the right of free movement," a draft copy of a statement from the meeting said.

The Paris attacks in which 130 people died have raised troubling questions about border security in the Schengen zone, where citizens of 22 EU countries, plus non-EU members Norway, Switzerland, Iceland and Liechtenstein, enjoy passport-free travel. Schengen has come under scrutiny following the revelations that some of the Paris attackers came from Belgium, and that alleged ringleader Abdelhamid Abaaoud may have come back from fighting with DAESH in Syria to take part. He was killed in a police raid on Wednesday.

EU officials said travelers will now not only have their passports examined but also have their personal information checked against databases. French Interior Minister Bernard Cazeneuve asked for the crisis meeting after the attack in Paris last Friday in which DAESH militants with ties to Syria and a planning cell based in Belgium killed 129 people across the city. "We asked for this meeting because we want Europe, which has lost too much time on issues that are urgent, [to] take the decisions today which need to be taken," he said on arrival for the talks.

He said cracking down on firearms trafficking, unblocking stalled EU legislation on tracking airline passengers and tightening passport checks at the external borders of the EU's open-border Schengen zone were priorities. "We can't lose any more time," Cazeneuve said.

Adding to fears about the global terrorist threat, gunmen seized 170 people in a hotel used by foreigners in the capital of Mali, with at least three hostages killed.

The EU meeting was held amid concerns about how the Paris gunmen were able to remain under the radar despite some showing signs of radicalism and moving through several EU countries.

The European Commission also called for the establishment of an EU-wide intelligence agency in the wake of the Paris massacre. "I believe it is a moment to make one more step forward and put the basis for the creation of a European intelligence agency," EU Migration, Home Affairs and Citizenship Commissioner Dimitris Avramopoulos told reporters in Brussels. But German Interior Minister Thomas de Maiziere said he found it hard to believe that the 28-nation EU was "ready to give up our national sovereignty. … We should concentrate on the improvement of the exchange of information between existing institutions."

Refugees generally travel to Greece, then Macedonia, Serbia, Croatia and Slovenia before heading to Austria and Germany, where most want to stay. The EU has been criticized for lacking a collaborative response to the crisis. The U.N. refugee agency encouraged EU countries to do more to share the burden of the international community in the refugee crisis.
RELATED TOPICS