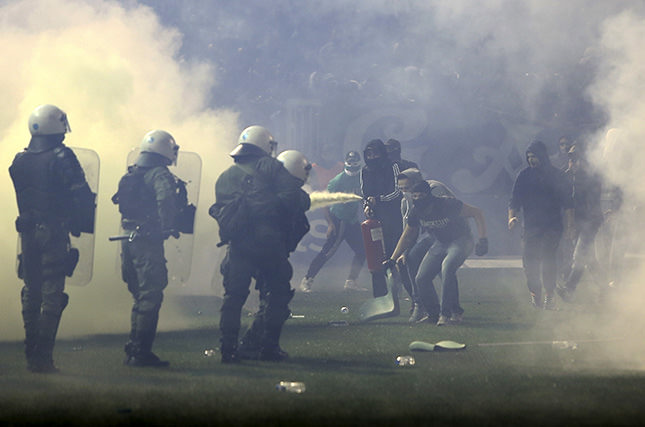 Scuffles between riot police and fans outside the Apostolos Nikolaidis ground made for a hostile atmosphere and, after a flare exploded at the feet of Alfred Finnbogason, the striker and his Olympiakos' team mates fled to the dressing rooms.

The incident took place shortly after the visiting players came out to walk on the pitch.

Finnbogason was unharmed but Olympiakos then decided not to bring the players out for the warm-up and asked officials for the match to be called off.

Panathinaikos said the flare did not cause injury to anyone and asked for the match to go ahead but promised to abandon it if there were any further such incidents during the game.

But after an hour-long delay the match was officially called off by referee Andreas Pappas with the announcement sparking a mass pitch invasion by the home fans who then fought ugly running battles with riot police on the pitch.

Supporters tossed flares, ripped up seats and threw other missiles at police who responded by firing tear gas at the swathes of fans to disperse them.

The violent scenes were reminiscent of the same fixture last season, which Panathinaikos won 2-1 but were later handed a three-point deduction, a two-match supporters ban and were fined for an unsavoury pitch invasion after the final whistle.

It was hoped Saturday's match would be an entertaining affair, with Olympiakos arriving on the back of a perfect 10-match winning streak since the start of the season.

They are eight points clear of the Greens, who hoped for a win to inject some excitement into the Super League title race with coach Andrea Stramaccioni in the dugout for the first time.

A decision had yet to be made on the outcome of the match, with a stadium announcement by officials stating that the game would not go ahead and "the appropriate bodies and organisations will decide on the next steps".

It is highly likely that Olympiakos will be awarded a 3-0 victory, with local media speculating that the authorities could decide by Sunday also to temporarily suspend the league.