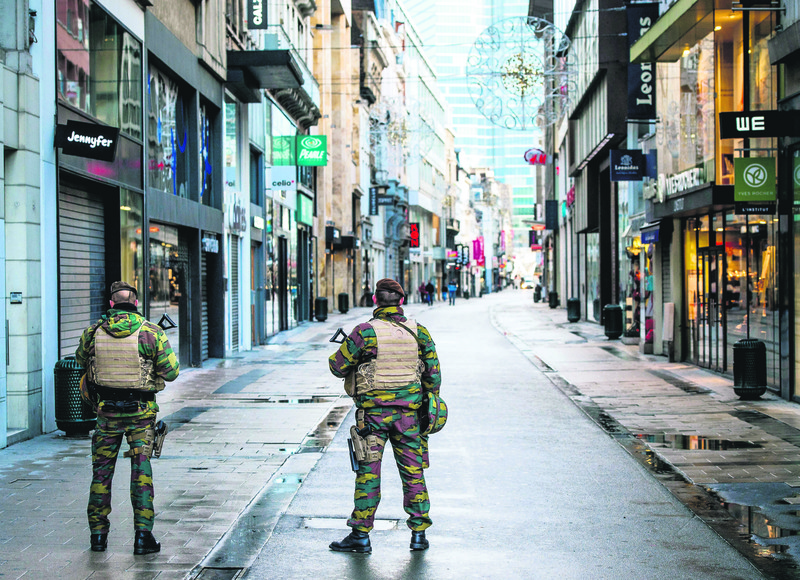 The EU capital resembled a ghost town on Sunday with police and troops on the streets. The metro, shops and restaurants were closed after the terror alert was raised to its highest level because of what officials said was an ‘imminent threat'

The Belgian capital was locked down for a second day on Sunday with police and troops on the streets as the authorities hunted for several suspects linked to the Paris attacks.

With the world on edge over the extremist threat, U.S. President Barack Obama said the most powerful tool to fight the terror of the DAESH extremist group was to say "that we are not afraid." In Paris, Defense Minister Jean-Yves Le Drian said a chemical or biological attack "was among the risks" but that all possible precautions had been taken.

Belgian officials were discussing on Sunday whether to extend the security alert in Brussels, imposed over fears extremists were plotting similar strikes to the attacks in Paris that left 130 people dead on Nov. 13. The city's metro system and public buildings were closed on Saturday, with shops and restaurants following suit after the terror alert was raised to the highest level of four because of what officials said was an "imminent threat."

Central Brussels, usually bustling on a Saturday evening, was virtually deserted, with police and troops on patrol. Interior Minister Jan Jambon said the authorities were looking not just for Paris attacks suspect Salah Abdeslam who managed to slip past French security forces after the carnage in the City of Light. He warned that the capture of Abdeslam, a Belgian-born 26-year-old whose brother blew himself up at a cafe in Paris, would not in itself end the threat. "It involves several suspects and that is why we have put in place such exceptional measures," the Belga news agency cited Jambon as telling Flemish television. "We are following the situation minute by minute... there is a real threat but we are doing everything possible day and night to face up to this situation," Jambon said.

Belgium and the capital, home to the European Union and NATO, are no strangers to extremist violence. Four people were shot dead at the Brussels Jewish museum last year, and in January security forces killed two suspects linked to the Charlie Hebdo killings in Paris. The EU has been under huge strain trying to cope with a massive flow of migrants fleeing conflict in the Middle East and across Africa and the Paris massacre fanned fears that dangerous extremists could be hiding among the refugees. The U.N. Security Council on Friday authorized nations to "take all necessary measures" to fight DAESH after a wave of attacks, including the downing of a Russian aircraft in Egypt with the loss of 224 lives and the storming of a luxury hotel in Mali, which left 19 dead.

Obama said Sunday he would press ahead with a visit to Paris for U.N. climate talks in December, calling on world leaders to show similar resolve. "I think it's absolutely vital for every country, every leader, to send a signal that the viciousness of a handful of killers does not stop the world from doing vital business," he said. "In addition to hunting down terrorists, in addition to effective intelligence, in addition to missile strikes and in addition to cutting off financing and all the other things that we're doing, the most powerful tool we have to fight DAESH is to say that we're not afraid."

Russian President Vladimir Putin said the Mali attack, in which six Russians died, "confirms that terrorism knows no borders and is a real danger for the whole world." "It is only possible to confront this threat with the broadest international cooperation."

Meanwhile a Turkish Airlines plane flying from New York to Istanbul with 256 people on board was diverted to Canada on Sunday because of a bomb threat, police said.

The suspected ringleader, Abdelhamid Abaaoud, was killed in a massive police raid on Wednesday along with his cousin Hasna Aitboulahcen, reportedly a one-time party girl who turned to an extremist about six months ago. Police also found the body of an unidentified suicide bomber, who, according to DNA tests, is not known to police. In all, seven attackers died in Paris.

Salah Abdeslam may be equipped with a suicide belt, according to Hamza Attou, one of two suspects charged by Belgian authorities for allegedly helping him return to the country after the attacks. Abaaoud was a notorious Belgian extremist thought to be fighting in Syria and his presence in Europe has raised troubling questions about a breakdown in intelligence and border security. The European Union agreed on Sunday to rush through reforms to the passport-free Schengen zone.

On Nov. 13, France was hit by its worst terror attack since World War II. At least 130 people died, and more than 350 were wounded, with dozens still in critical condition. Europe got alarmed after the attacks with extra security measures and re-instating of border checks at the internal borders of the EU, which may bring Schengen at risk and make it harder for refugees who seek a safe haven after fleeing violence to get European countries.
RELATED TOPICS