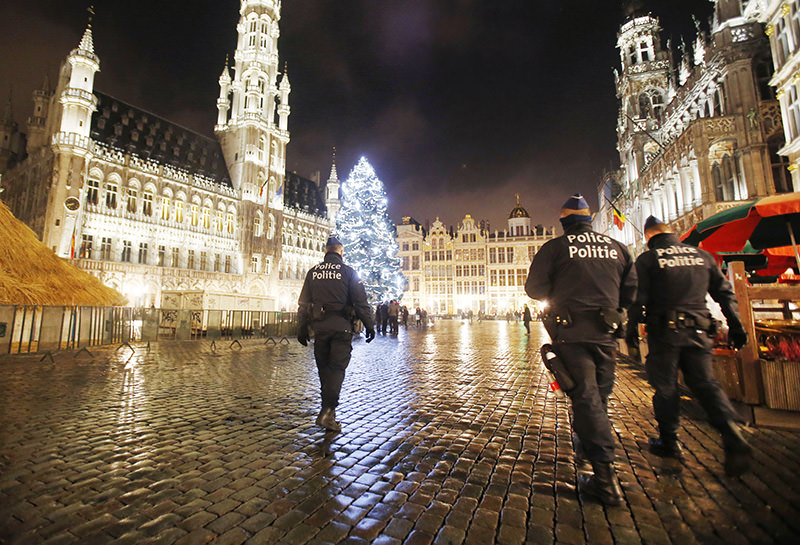 by Nov 23, 2015 12:00 am
Belgium extended a maximum security alert in Brussels for a week on Monday as a manhunt went on for Daesh suspects in the Paris attacks, but the usually bustling city's metro and schools could reopen from Wednesday.

The threat of Paris-style attacks on crowds and gatherings remained imminent, Prime Minister Charles Michel told a news conference after a near four-hour meeting with security advisers. But he also wanted the city, home to the European Union and NATO, to get back to normal.

"The threat is the same as yesterday," said Michel, who on Saturday raised the alert level to the highest of four grades.

With troops and armed police patrolling the streets of Brussels, prosecutors said they had charged a fourth person with terrorist offences linked to the shootings and suicide bombings that killed 130 people in the French capital on Nov. 13.

They released all 15 others detained in police raids on Sunday. Two of five people detained on Monday were also released while the other three had their custody prolonged.

Three people were charged last week, one with possession of firearms and two who drove nearly 300 km (190 miles) from Brussels to Paris hours after the attacks to fetch home Salah Abdeslam, 26, whose elder brother blew himself up at a cafe.

Despite intense police activity, mainly in Brussels, Salah Abdeslam remains at large and ministers have said he, or others, could pose a threat to a city from where French investigators say the Paris attacks were planned by Belgian and French jihadists, some of whom had returned clandestinely from Syria.

Another of Abdeslam's brothers said he thought the younger man might have had a change of heart and abandoned the Paris attackers -- a theory lent credence on Monday when what appeared to be an explosive belt was found in a rubbish bin near Paris, close to where Abdeslam's mobile phone signal had been tracked.

With the underground rail system shut since Friday night, Brussels has been unusually quiet, reinforced by cancellations of many public events and, on Monday, by the closure of schools.

Businesses, particularly hotels, restaurants and shops catering to tourists have begun to worry and the prime minister said that, while keeping the alert level at its highest till next Monday, some closures would ease.

"We want progressively to return to normality," he said. "Schools in Brussels will open on Wednesday and the metro on Wednesday, too. For the metro it could be done in stages."

But large gatherings could be discouraged and the security forces would remain on guard: "The potential targets are the same as yesterday too," Michel said.

Islamic State issued a video of a masked man identified as Belgian fighter urging his "brothers" to follow the example of the Paris attacks.

Interior Minister Jan Jambon, whose security services have come under sharp criticism from France and elsewhere in Europe for allowing violent radicals to gain a particularly strong foothold in Belgium, said he saw no rapid end to the manhunt.

"My hope is that we will arrest them in the next few hours," he told reporters on Monday evening. "But being realistic, the investigation will take a bit more time."

The metro, museums, most cinemas and many shops are set to stay shut on Tuesday in the city of 1.2 million, where many staff have opted to work from home. There will also be no school or university for almost 300,000 students.

However, bus and tram lines ran and suburban shops opened.

NATO, which raised its alert level after the Paris attacks, said its headquarters were open but some of the 4,000 people who work there were asked to work from home. Visits were cancelled.

EU institutions, which employ some 21,000 people in Brussels, were also open with soldiers patrolling outside.

Workers were also setting up stalls for the city centre Christmas market, which is due to open on Friday, and local organisers of the Davis Cup tennis final between Belgium and Britain in the city of Ghent, 55 km (35 miles) west of the capital, said it would go ahead this weekend.

Germany has kept security along its border with Belgium at a high level since the Paris attacks, a German police spokesman said after reports that Abdeslam was spotted near the frontier. Belgian police said a report of a sighting on Sunday was wrong.

Shares on the Brussels stock exchange initially dipped, but had recovered by mid-session. The Bel-20 blue-chip index, which includes brewer Anheuser-Busch InBev and chemicals firm Solvay, closed down 0.27 percent, in line with Europe.

ING economist Philippe Ledent noted the biggest companies' business was international and therefore the global situation was more important to them. "For smaller companies active mostly in Belgium, they will have business in the rest of the country which is less affected," he said. "If this is limited in terms of days, in terms of area, it's not so much of a problem."

Among those who decided to go out on Monday was Zineb Toubarhi, a business engineering student in Brussels: "It feels strange to see armed soldiers in the streets," she said. "But it's for our security so, I don't know why, but I'm not afraid."