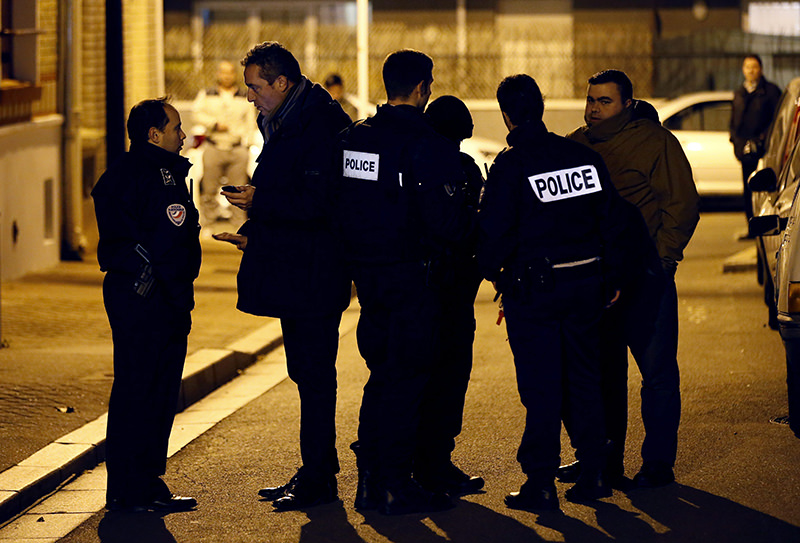 French police officers stand guard in a street after an explosive vest without detonator was found (EPA Photo)
by Associated Press Nov 24, 2015 12:00 am
A street cleaner in a Paris suburb found an explosive vest similar to those used in the Paris attacks on Monday near the place where a suspect's mobile phone had been found, raising the possibility that he aborted his mission, either ditching a malfunctioning vest or fleeing in fear.

The discovery of the vest came as Belgium's prime minister cited a "serious and imminent" threat justifying keeping the highest alert level operational for at least another week. The security measures, already in place for three days, have severely disrupted normal life in the capital.

In France, police said an explosive vest without a detonator was found by a street cleaner in a pile of rubble in Chatillon-Montrouge, on the southern edge of Paris and a considerable distance from the sites of the attacks on the Right Bank of the Seine to the north. A police official later said the vest contained bolts and the same type of explosives TATP as those used in the Nov. 13 Paris attacks that claimed 130 lives and left hundreds wounded.

The device was found Monday in the same area where a cellphone belonging to fugitive suspect Salah Abdeslam was located on the day of the Paris attacks but the vest has not been formally linked to him, said two police officials who spoke on condition of anonymity because they were not authorized to discuss the investigation.

Belgium-based terrorism expert Claude Moniquet, who has been in contact with both Belgian and French investigators since the attacks, laid out two possibilities: that Abdeslam became afraid of carrying out a suicide mission or, more likely he says, that he simply ditched a defective explosive vest.

Nervousness could have played a role in concocting a defective vest, but he said he doubted fear played a role for among Daesh followers, "it is rare not to go to the end."

Moniquet said this was only theory since he had not yet spoken to investigators about the explosive vest find.

A manhunt is underway for Abdeslam, whose brother Brahim was among attackers who blew themselves up. He crossed the border into Belgium after the attacks, with French police stopping and interviewing him, before letting him go.

Belgian Prime Minister Charles Michel said Brussels, which houses the headquarters of the European Union and NATO, faced a "serious and imminent" threat that requires keeping the city at the highest alert level, while the rest of the country would stay at the second-highest level. Belgium's crisis center said the alert level would only change if a significant breakthrough warranted it.

The increased security measures in the wake of the massacre in Paris have virtually shut down the Belgian capital, with the subway system, many shops and schools remaining shut on Monday. Michel said that despite the continued high-alert level, schools would reopen Wednesday, with parts of the subway system beginning to operate. He did not say when the system would be completely online again.

"We are very alert and call for caution," Michel said. "The potential targets remain the same: shopping centers and shopping streets and public transport."