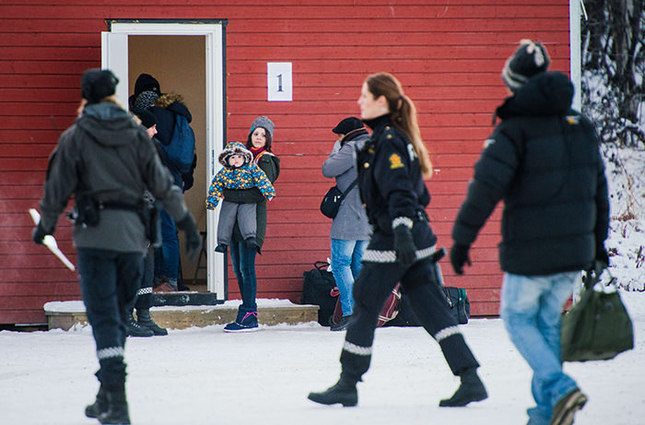 Refugees are welcomed upon arrival at the Norwegian border crossing station at Storskog after crossing the border from Russia on November 12, 2015 near Kirkenes (AFP Photo)

Norway has begun publishing adverts in Afghanistan's newspapers to dissuade Afghans from seeking asylum in the Scandinavian country, the Norwegian government said on Thursday.

"The goal is to persuade people to not sell all their belongings and put their lives in the hands of human traffickers, because they risk being sent back to the country from which they came," Joran Kallmyr, a state secretary at the justice ministry, told AFP.

The adverts, entitled "Stricter asylum regulations in Norway" and published in English and the Afghan Dari language on the front page of two Afghan newspapers, explained that people coming from areas of Afghanistan designated as safe or who hold a residency permit in another country will be expelled, by force if necessary.

Norway has recently seen a rise in the number of asylum requests from Afghans, even outnumbering those from Syrians in the past three weeks, with 2,212 applications from Afghans and 2,138 from Syrians.

Some of the Afghans arriving in Norway have previously stayed legally in Russia, and Oslo has decided to send those people back to Russia, or, if that isn't possible, to Kabul.

Fearing a reputation as an open country, Norway launched a Facebook campaign in early November informing potential asylum seekers about how difficult it is to get residency in the Scandinavian country.

The adverts published since Monday in the Afghan press come on the heels of a Danish government initiative earlier this year, which bought ad space in Lebanese newspapers aimed at dissuading Syrian refugees from coming.

After neighbouring Sweden on Tuesday announced a drastic tightening of its previously very generous asylum regulations, Oslo now fears that many refugees will head to Norway instead.

Since the beginning of 2015, some 30,000 asylum seekers have arrived in Norway, a country of 5.2 million people which is a member of the border-free Schengen zone but not the European Union.