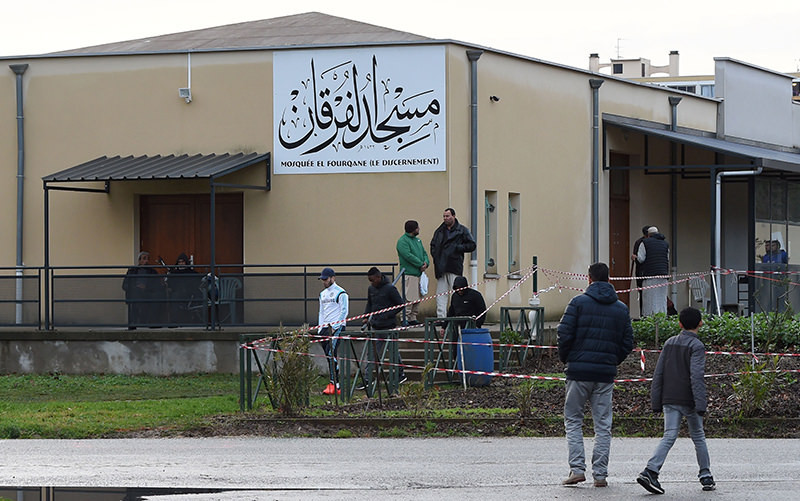 | AFP Photo
by Associated Press Jan 02, 2016 12:00 am
A French prosecutor says investigators see no links between a man who rammed his car into four soldiers guarding a mosque in the southeastern city of Valence and "a terrorist network or terrorist act."

The man was stopped Friday when a soldier fired and wounded him. France is on high alert after the coordinated attacks by Daesh terrorists in Paris on Nov. 13.

Prosecutor Alex Perrin said Saturday "so far it seems to be the act of an individual."

Perrin said the 29-year-old French citizen of Tunisian descent is a practicing Muslim not reported as radicalized. He was not known to the police and justice services and has no psychiatric history.

Perrin said the man claimed in confused comments that he wanted "to kill soldiers because soldiers kill people."

No weapons or explosive devices have been found inside his car.

The man, who is still hospitalized, could be charged in coming days with "attempted murders against persons holding state authority."

The soldiers fired warning shots and then fired to disable the driver, who was hit in the arm and leg. In total, over 30 shots were fired.

One soldier was slightly injured in the leg, and a passerby was hit in the leg by a stray bullet.

France has been in a state of emergency since the Nov. 13 Paris attacks, claimed by the Daesh group, that killed 130 people and injured hundreds more. The soldiers by the mosque are part of the reinforced security guarding places of worship and other sensitive sites around France.
Last Update: Jan 02, 2016 6:14 pm
RELATED TOPICS