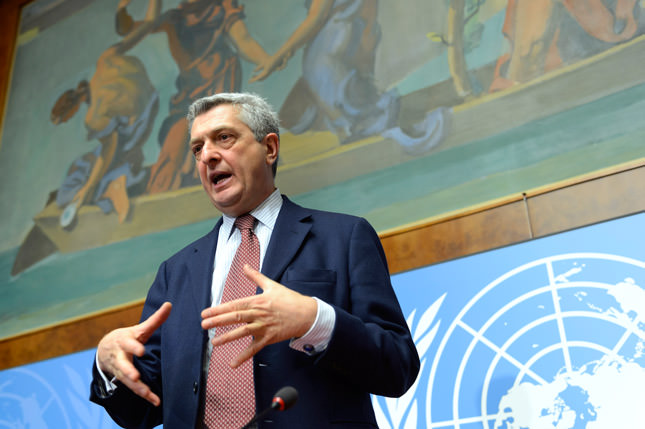 by German Press Agency - DPA Jan 07, 2016 12:00 am
German Chancellor Angela Merkel's migration policy sets an example for the rest of Europe and the world, newly appointed UN refugee chief Filippo Grandi said Thursday, as he appealed to Germany to keep borders open to people in need.

"We are not naive and know that the government has lots of pressure and we congratulate the chancellor's openness to bring [in] at least people from countries who come from war," the UN high commissioner for refugees told reporters in Geneva.

Merkel has repeatedly defended her open-doors stance on migration in response to criticism from the public and within her own coalition. Over 1 million people lodged an asylum bid there in 2015, putting immense pressure on local authorities.

"[Germany's stance] is important for asylum seekers, for leadership in Europe and as an example to the rest of the world," the Italian diplomat said, warning that other countries might follow suit if the state closed its borders.

Grandi also said he wanted to promote resettlement programmes for Syrian refugees in countries that have received fewer asylum applications.

Only 28 countries currently take part in the UN resettlement programme. The United States, Canada, Australia and Nordic countries are the biggest hosts.

Grandi has scheduled a pledging conference for resettlement spots on March 30 in Geneva.

Before taking office at the start of the year, he had served as head of the UN agency for Palestinian refugees. He succeeds Antonio Guterres from Portugal in his role as high commissioner.
Last Update: Jan 07, 2016 3:24 pm
RELATED TOPICS