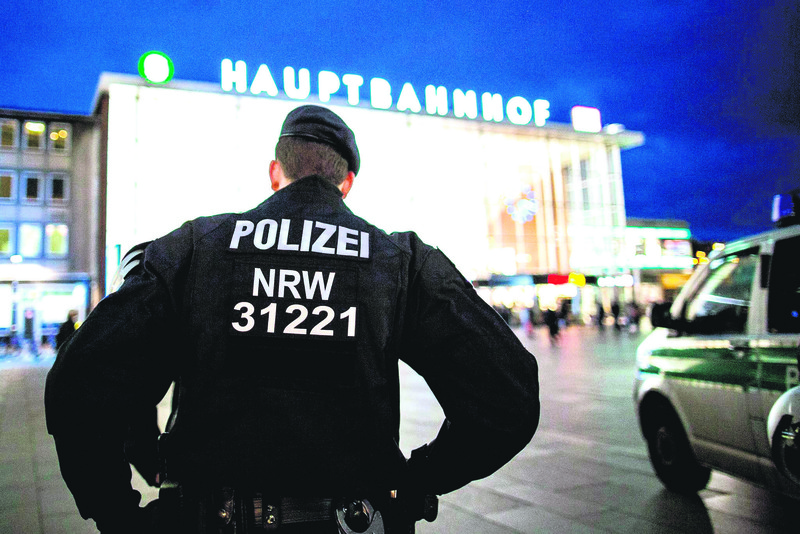 Police officers stand outside the main station in Cologne, Germany, Jan. 6, 2016. After sexual assaults on women at New Year, there has been increased police presence at the main station. (EPA Photo)
by Daily Sabah with Reuters Jan 09, 2016 12:00 am

Although Cologne police have not confirmed migrants were among the suspects who assaulted on women in Cologne on New Year's Eve, Germany promised to severe measures against migrants

Germany's ruling parties promised on Friday to crack down aggressively on migrants who commit crimes, after assaults on women in Cologne on New Year's Eve stoked debate about Chancellor Angela Merkel's welcoming policy towards refugees.

Some 121 women are reported to have been robbed, threatened or sexually molested there by gangs of mostly drunk men between 18 and 35 years old while out celebrating. Cologne's police chief has said the perpetrators appeared to be of "Arab or North African" origin and the head of the police union in the region was quoted by German daily Die Welt as saying there were "definitely" refugees among them.

In response to the assaults, Merkel's Christian Democrats (CDU) have called for tougher penalties against offending asylum seekers, according to a draft paper seen by Reuters ahead of a meeting of the party leadership in Mainz. The paper says refugees and asylum seekers who have been sentenced to prison or probation should be barred from eligibility for asylum. This sentiment was echoed by Vice Chancellor Sigmar Gabriel, who is also leader of the Social Democrats (SPD), coalition partners to Merkel's conservatives. "Why should German taxpayers pay to imprison foreign criminals," Gabriel said. "The threat of having to spend time behind bars in their home country is far more of a deterrent than a prison sentence in Germany."

Cologne police have not confirmed that refugees were among the attackers on New Year's Eve, but Arnold Plickert, chief of the police union in the state of North Rhine-Westphalia said there was no doubt in his mind. "The suggestion that nothing points to refugees as being among the attackers is wrong in my view," Plickert told Die Welt. "There were definitely refugees among the perpetrators." The CDU paper calls for lower barriers to deport criminal asylum seekers, increased video surveillance and the creation of a new criminal offence for physical assault.

The assaults have raised doubts over whether Germany, which took in 1.1 million refugees last year, can succeed in integrating the latest wave and prompted renewed calls for limits on the number of new arrivals. "If a direct link is shown between the assaults and the arrival of Middle Eastern migrants, the CDU could lose ground in state elections in March, and Merkel will come under greater pressure to introduce an upper limit on the number of migrants entering Germany," said Eurasia analyst Mujtaba Rahman.

The crimes have stunned Germany, where a massive influx of refugees from the Middle East and other regions has also triggered widespread xenophobia and anti-immigrant sentiment and refugees fear to be targeted because of the incident. Recently, Europe has witnessed a shift towards the right-wing, anti-migrant parties, which have been gaining popularity amid rising public fears regarding the refugee influx. The polls showed a rise in support for right-wing parties in Austria, Poland and Switzerland. Similarly, anti-migrant and anti-Islam movements such as PEGIDA (Patriotic Europeans Against the Islamization of the Occident) have been on the rise.
RELATED TOPICS