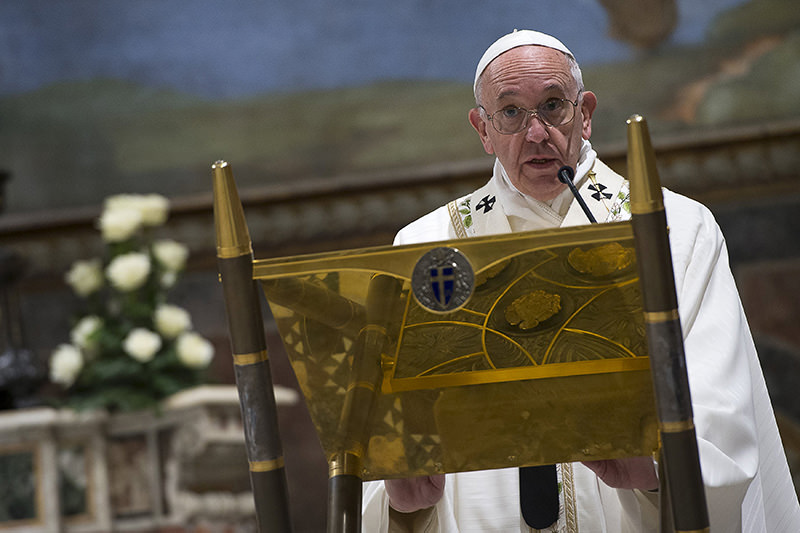 Pope Francis speaks during a baptism ceremony in the Sistine Chapel at the Vatican, January 10, 2016 (Reuters photo)
by German Press Agency - DPA Jan 11, 2016 12:00 am
European nations can and must jointly take the challenge of protecting their own citizens without withdrawing shelter from migrants, Pope Francis said Monday.

The "present wave of migration seems to be undermining" Europe's "humanistic spirit," but it should not allow a "loss of values and principles of humanity ... however much they may prove, in some moments of history, a burden difficult to bear," he said.

"Europe ... has the means to find the right balance between its twofold moral responsibility to protect the rights of its citizens and to ensure assistance and acceptance to migrants," the pontiff told diplomats accredited at the Holy See.

Francis cautioned that the countries facing the brunt of the migration emergency "not be left alone" and urged a "frank and respectful dialogue among the countries - of origin, transit and reception - toward a sustainable solution."

"There is no place for autonomous solutions pursued by individual states," he said. "Migrations ... will play a pivotal role in the future and our response can only be the fruit of a common effort respectful of human dignity and the rights of persons."

Francis repeatedly addressed the fate of migrants who began arriving at a massively increased rate in 2015.

He visited the Mediterranean island of Lampedusa, one of their gateways to Europe from North Africa, shortly after taking office, met refugees several times and has called on the clergy to shelter migrants.

The surge of people arriving through the Balkan migration route - from Turkey, to Greece, Macedonia, Serbia, Croatia and Slovenia - continued despite the stormy, dangerous weather that has claimed dozens of lives in the Aegean in recent days.

Two Greek ferries shuttled more than 1,600 migrants from the Aegean islands to Athens on Sunday afternoon and Monday morning.

At the other end, in Slovenia, the authorities registered 25,000 refugees who transited the country en route to Austria and further to Western Europe in the first 10 days of the year.
Last Update: Jan 11, 2016 4:39 pm
RELATED TOPICS