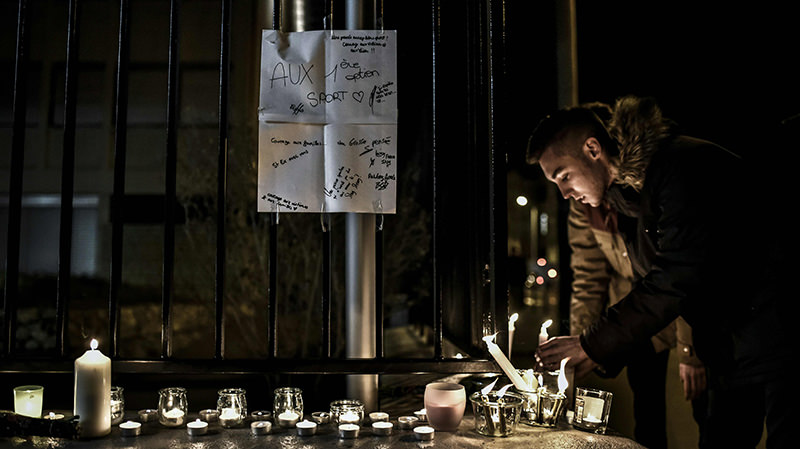 A student lights a candle outside the Saint-Exupery high school in Lyon, central-eastern France, on January 13, 2016 (AFP Photo)
by Compiled from Wire Services Jan 13, 2016 12:00 am
A deadly avalanche hit a high school group skiing in the French Alps on Wednesday, killing two students and a Ukrainian skier and seriously injuring three others, officials said.

"Five people have been found and searches are still underway," the head of the police unit, Bernard Host, told Reuters.

Officials say the avalanche hit 10 students and a teacher from the Lycee St. Exupery school in Lyon. A telephone crisis center has been set up for relatives and friends at the school, which serves over 2,000 middle school and high school students.

Local officials did not give any information on the number of missing but said 60 workers had been mobilized in the search-and-rescue operation, which was being hampered by the dark and the continuing danger of more avalanches.

The regional Dauphine Libere newspaper reported that four of the students were found in cardiac arrest. Officials say the teacher is alive and has been taken to a hospital in Grenoble.

Three of the victims were found in a state of cardiopulmonary arrest, police said.

The avalanche occurred on a black-rated slope that had been closed after several days of heavy snowfall, the mayor of a nearby town told regional newspaper Le Dauphine Libere.

The prefect of the Isere region has told BFM-TV that the ski trail where a deadly avalanche hit a school group was so risky it had been closed since the "beginning of the (ski) season" in December.

Jean-Paul Bonnetain said Wednesday evening that the group leader "had taken the initiative" to lead the school group onto this piste.

He said that the trail "was really of a technical level" that is not suitable for beginners or high schoolers aged between 16 and 17.