Ukraine must restore sovereignty in war-torn east and Crimea in 2016: Poroshenko 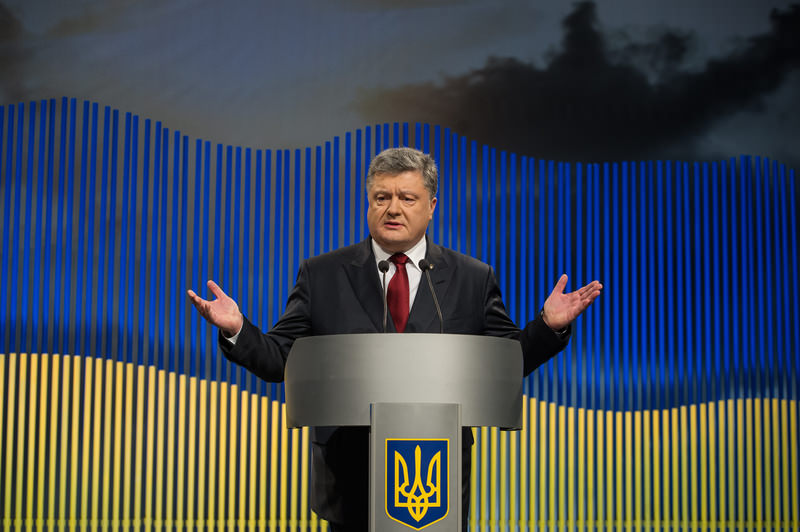 by Daily Sabah with DPA Jan 15, 2016 12:00 am
Ukrainian President Petro Poroshenko on Thursday assured his country that it should regain control over its war-torn eastern regions this year. He also touched upon the country's willingness to regain control of Russian-annexed Crimea.

"Ukrainian sovereignty over the occupied territories of the Donetsk and Luhansk regions should be restored in 2016," Poroshenko said in an opening speech at a press conference in Kiev, according to a transcript on his website.

He said he would restore peace and use diplomatic, political and international legal means to regain control over the regions, held by pro-Russian separatists since a rebellion broke out following the ouster of Poroshenko's pro-Russian predecessor in 2014.

Poroshenko added that he would use similar means to try to regain control over Crimea, which neighbouring Russia occupied and annexed around the same time as the rebellion began.

He said his country has been able to break free of its dependence on Russian natural gas supplies like a drug user overcoming addiction.

"The needle of gas that the country has been using for decades - for all the years that [post-Soviet] Ukraine has existed - and that turned out to be our lifelong curse - has finally disappeared," Poroshenko said in the speech.

He added: "We now buy twice as much gas from the European Union than we get from Siberia."

He also said he will soon submit for parliamentary approval the rest of the required legislation that Ukraine needs to enact in order to achieve a visa-free travel regime with the EU.

Poroshenko, who rose to presidency in 2014 amid mass protests calling for closer ties with the West, has become significantly unpopular as Ukrainians increasingly believe he has failed to fulfill his campaign promises, US-based pollster Gallup said last month.

Poroshenko's approval rating among the Ukrainian people is a meagre 17 per cent, below the 28 per cent that his pro-Russian predecessor Viktor Yanukovych had before being ousted amid the protests, the pollster said in a statement.

For comparison, Poroshenko's approval rating in December 2014 - eight months after being elected - was 47 per cent, according to the pollster.

"Poroshenko's low approval rating largely reflects Ukrainians' disenchantment with their leadership, which many feel has failed to deliver on what protesters demanded when they took to the streets two years ago," the pollster said in a statement on its website.

"Since the Maidan revolution, Ukraine's economy has been in shambles, the Crimea region joined Russia, and fighting between Ukrainian forces and pro-Russian separatists in the country's east has claimed more than 9,000 lives," the pollster said.
Last Update: Jan 15, 2016 1:06 am
RELATED TOPICS