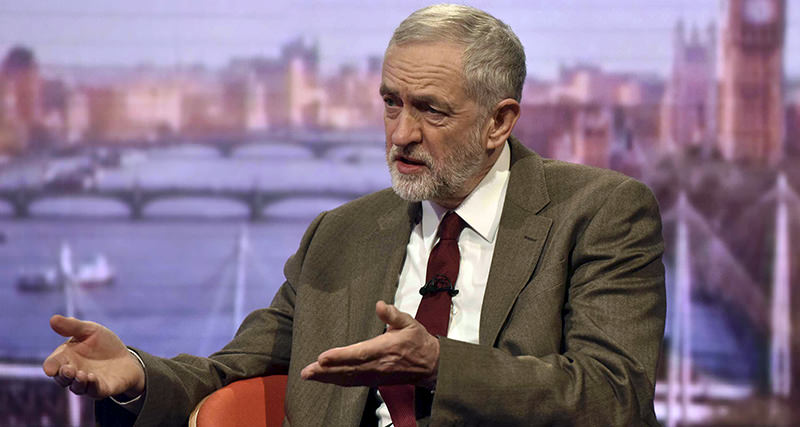 Britain's opposition Labour Party leader Jeremy Corbyn speaks on the BBC's Andrew Marr Show in London, January 17, 2016. (Reuters Photo)
by reuters Jan 17, 2016 12:00 am
Britain's opposition leader invited U.S. Republican presidential candidate Donald Trump, who sparked an outcry by calling for a ban on Muslims from entering the United States, to join him on a visit to a London mosque.

The comments from Labour leader Jeremy Corbyn, a socialist who represents a multi-ethnic district of north London, come a day before the British parliament debates a motion calling for a ban on half-Scottish Trump from visiting the country.

"As you know my wife is Mexican and my constituency is very, very multi-cultural so what I was going to do was go down to the mosque with him and let him talk to people there," he said.

The billionaire frontrunner for the Republican presidential nomination called for a ban on Muslims entering the U.S. and has made xenophobic comments about Latinos.

British lawmakers are due to debate on Monday a petition signed by more than half a million people calling for Trump to be barred from Britain, although the debate will not be followed by a vote.

Trump has threatened to cancel over 700 million pounds of investments in golf courses in Scotland if Britain slaps him with a travel ban.

He has also been involved in a spat with the Scottish government over plans they approved for an offshore wind farm project near one of his golf courses, calling former first minister Alec Salmond "an embarrassment to Scotland."

On Sunday, Salmond, who sits as a lawmaker in the British parliament, told the BBC he would likely support barring Trump from the country.

"He wants to ban all Muslims from the United States. I want to ban all Donald Trumps from Scotland," he said.
Last Update: Jan 17, 2016 4:56 pm
RELATED TOPICS