Leaders in Davos warn EU could unravel over Syrian crisis 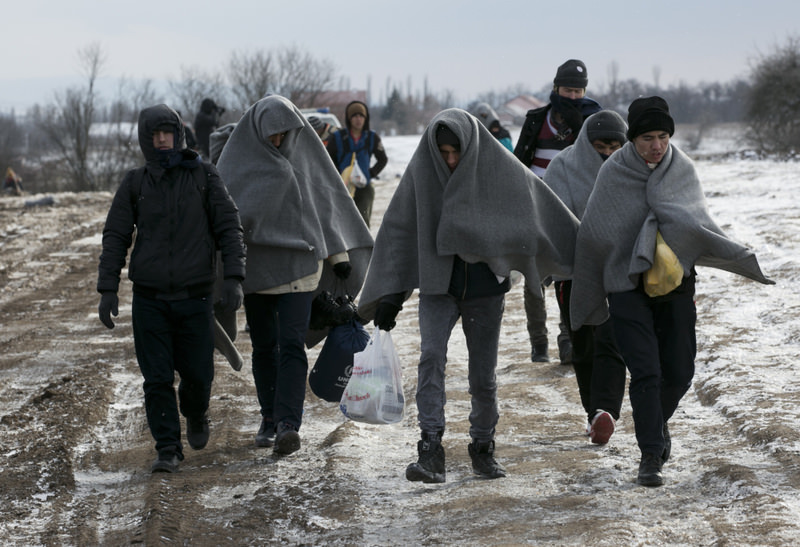 Migrants cover themselves with blankets to keep warm as they walk through snow from the Macedonian border into Serbia. (AP Photo)
by Daily Sabah with Reuters Jan 23, 2016 12:00 am

Amid an unprecedented wave of refugees, leaders in Davos warned that the EU could unravel if they fail to agree on a common and comprehensive solution for the refugee crisis. New border controls and restrictions have brought Schengen concerns under the spotlight again

Fear of a severe weakening of the European Union is the hot topic in the corridors and executive suites of Davos this year with business leaders and politicians at the World Economic Forum alarmed at closing borders and the risk of a British exit. The EU now is buffeted by a sea of crises over migration, security, rising anti-European populism, illiberal trends in central Europe and a highly uncertain British referendum on continued membership.

The European Union could unravel if member states fail to agree on a common approach to the refugee crisis and security challenges in the next few months, leaders meeting in the Swiss resort of Davos warned on Thursday.

A day after Austria announced a formal cap on the number of refugees it would allow in this year, raising pressure on German Chancellor Angela Merkel to do the same, top European politicians pleaded for a deal in which states would agree to accept quotas of refugees. But they admitted that such an agreement remained elusive, with many countries, including much of central Europe, refusing to accept any migrants. "I'm not naive," Swedish Prime Minister Stefan Lofven told reporters when asked about the prospects of a quick deal. "My argument to the countries that are not willing to accept refugees is that if we can't handle this the European Union is at risk. If we cannot do it there is a risk to Schengen," he said, referring to Europe's passport-free travel zone.

Lofven and Dutch Prime Minister Mark Rutte said Europe had six to eight weeks to find a solution. Otherwise, border closures could undermine one of the European Union's core principles of free movement, hitting trade and raising questions about the future of the bloc, already threatened by a looming British referendum on its membership.

French Prime Minister Manuel Valls said the refugee crisis and security challenge in Europe posed existential threats. "The European project can die, not in decades or years but very fast, if we are unable to face up to the security challenge," Valls told the audience in Davos, two months after attacks by DAESH in Paris killed 130 people.

Austria announced on Wednesday that it planned to limit the number of people allowed to apply for asylum to 1.5 percent of its population over the next four years. For this year, the government said in a statement, the number would be capped at 37,500.

The move raised the risk of a "domino effect" in Europe and piled more pressure on Merkel, who has rebuffed domestic calls for a similar cap, arguing that it would be impossible to enforce without closing borders and tearing apart Europe.

Speaking a day earlier however, German President Joachim Gauck, a former East German pastor and dissident who is seen as a voice of morality in Germany, said it was not unethical to limit the influx of refugees, in comments that were seen as an indirect swipe at Merkel's open-door policy. Austrian Foreign Minister Sebastian Kurz defended the move by Vienna, telling reporters in Davos that his country had not given up on a European solution but simply couldn't afford to wait around forever.

"Some states are being overwhelmed and therefore there is a need to take national measures, but Austria is one of a small number of countries, with Chancellor Merkel in the lead, who are pushing for a European solution," Kurz said. "At the end of the day, we will do everything to work with her to find a European solution."

Josef Joffe, publisher-editor of German weekly Die Zeit, told Reuters that Merkel was looking increasingly isolated, describing Gauck's speech as "important." "Last year she was the Queen of Europe, but now she looks like she is falling from her perch," Joffe said.