First cases of Zika virus in Europe reported in UK 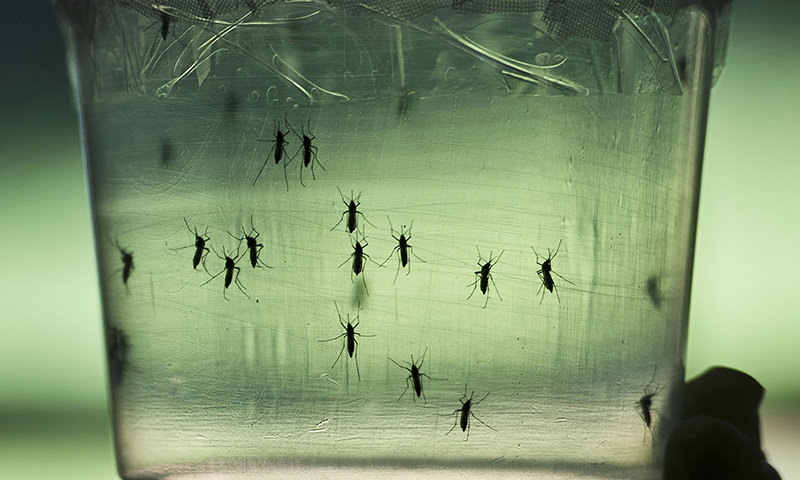 Aedes aegypti mosquitoes, which carry the Zika virus. Three cases of Zika have been confirmed in Britain. (AFP Photo)
by Daily Sabah with Agencies Jan 24, 2016 12:00 am
As the deadly Zika virus spreads rapidly in Africa, Central and Latin America and Europe is now also face-to-face with the mosquito-borne disease.

Public Health England revealed this week that three British citizens travelling back to the UK from South and Central America were infected with the Zika virus.

"As of January 18 2016, three cases associated with travel to Colombia, Suriname and Guyana have been diagnosed in UK travelers," the PHE said on its website.

The statement said that the virus was "not spread directly from person to person," but could, in rare cases, be transmitted via "sexual transmission or by transmission from mother to fetus via the placenta".

Issued by the U.S. Centers for Disease Control and Prevention (CDC) the travel warning recommends all women who have traveled to the virus-affected areas during pregnancy to be screened and monitored for the virus.

El Salvador also took the matter into its own hands on Thursday and urged women in the Central American nation to avoid getting pregnant until 2018 to avoid their children developing birth defects from the virus.

"We'd like to suggest to all the women of fertile age that they take steps to plan their pregnancies, and avoid getting pregnant between this year and next," said Deputy Health Minister Eduardo Espinoza.

He said the government decided to make the announcement because 5,397 cases of the Zika virus had been detected in El Salvador in 2015 and the first few days of this year.

In Colombia, which has the second-highest Zika infection rate after Brazil, the government is also advising women to delay becoming pregnant, but only for six to eight months.

The Zika virus is transmitted by the Aedes aegypti mosquito, which is also known to carry the dengue, yellow fever and Chikungunya viruses. These mosquitoes bite repeatedly and therefore visitors are urged to use bug repellants and apply them regularly.

Health experts are unsure why the virus - detected in Africa in 1947 but unknown in the Americas until last year - is spreading so rapidly in Brazil and neighboring countries.

There is no vaccine or treatment for Zika, which causes mild fevers, joint pains and rashes. An estimated 80 percent of those infected show no symptoms at all.

Brazilian researchers also found new evidence linking the virus to increasing incidence of microcephaly, a condition in which babies are born with unusually small heads which could lead to serious developmental problems.

U.S. authorities confirmed the first case of microcephaly on Saturday in Hawaii, from a mother who had been infected with the Zika virus while visiting Brazil.
Last Update: Jan 24, 2016 8:32 pm
RELATED TOPICS