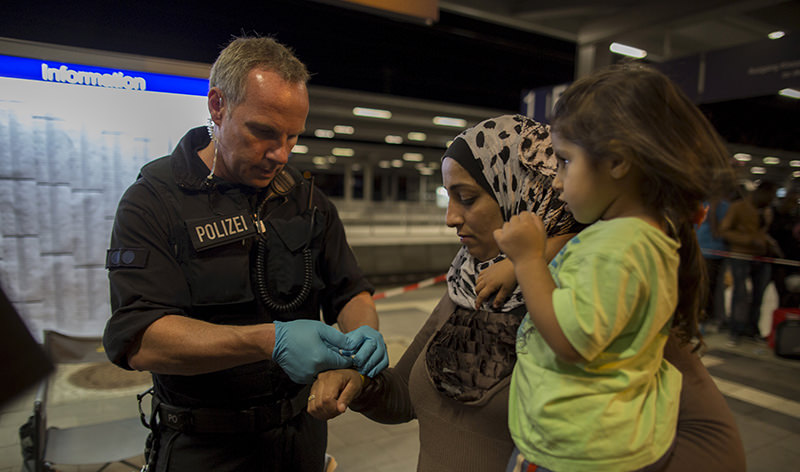 Wristbands have also been used for different purposes in Germany and other European states to identify refugees (Reuters Photo)
by Compiled from Wire Services
Jan 25, 2016 12:00 am
The British government was due to face questions in parliament on Monday over revelations that asylum seekers were forced to wear coloured wristbands in order to claim food at a centre in Wales.

The Welsh Refugee Council (WRC) likened them to the yellow stars Jewish people were made wear in Nazi Germany, but the company using the wristbands said it was only a practical measure to allow refugees to claim meals.

The policy is impacting asylum-seekers in Cardiff, Wales, 155 miles (240 kilometers) west of London who are being sheltered by Clearsprings Ready Homes, a company contracted by the British government.

"We have raised the matter many times with the Welsh Government. It harks back to the Nazi regime with people being forced to wear a Star of David and stand out," said WRC policy officer Hannah Wharf.

"It's absolutely appalling, it is treating people like lesser beings. It is treating them like animals lining up to feed."

Contacted by AFP, Clearsprings, the contractor running the Lynx House centre in the Welsh city of Cardiff, could not immediately comment.

"Full-board clients are required to show their wristbands in order to receive meals in the restaurant."

Jo Stevens, the justice spokeswoman for the opposition Labour party, said that she would raise the issue in parliament on Monday.

Stevens announced on Twitter that the wristband requirement would "cease", after she spoke to a Clearsprings representative.

Eric Ngalle, 36, who spent a month in Lynx House before being granted refugee status, told The Guardian that asylum seekers were identifiable to locals due to the wristbands, which made them targets for abuse.

"Sometimes drivers would see our wristbands, start honking their horns and shout out of the window, 'Go back to your country,'" Ngalle told the Guardian, describing the bands as "the garments of an outcast."

"If you take off the wristband you can't reseal it back on to your wrist so if you want to eat you have to wear it all the time," he added.

It follows a similar controversy in the northeast of England, where asylum seekers said they were targeted for abuse because the front doors of their homes were painted red by a private contractor.

Legislator Jo Stevens says the company has agreed to drop the policy, but company officials refused to comment Monday. The company said it would make a statement later.