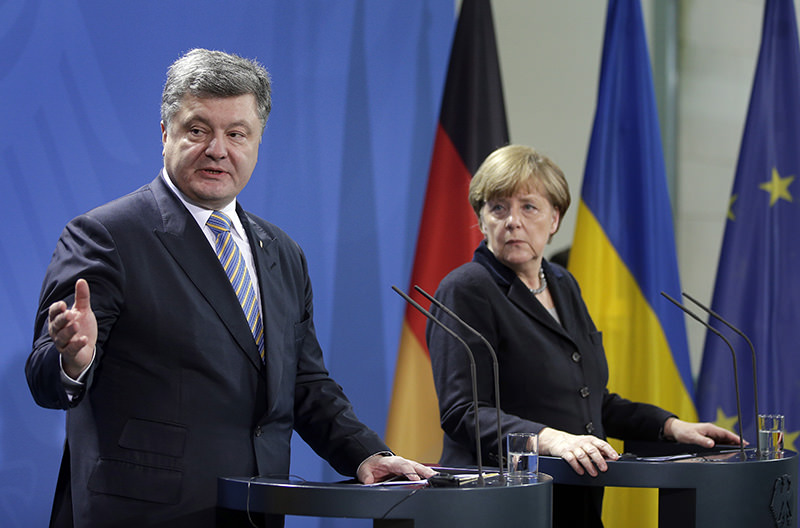 Angela Merkel, right, and Poroshenko, left, address media during joint statement as part of meeting at chancellery in Berlin, Germany, Feb. 1, 2016. (AP Photo)
by Feb 03, 2016 12:00 am
The risk of open war between Russia and Ukraine is greater than it was a year ago and Russian President Vladimir Putin has begun an "information war" against Germany, Ukrainian President Petro Poroshenko told the German newspaper Bild.

Poroshenko, who met German Chancellor Angela Merkel in Berlin on Monday, said Russia had implemented "not one single point" of the Minsk accord, which includes a ceasefire between Ukrainian troops and pro-Russian rebels in eastern Ukraine.

Russia was building up its military presence on the border with Ukraine, he said.

"The danger of an open war is greater than last year," Poroshenko told Bild, in an interview published in its Wednesday edition. "Russia is investing a great deal in war preparations."

Merkel pressed Putin by phone on Tuesday to use his influence to ensure that a ceasefire is upheld in Ukraine and that monitors from the OSCE European security organization are granted free access to conflict areas, her spokesman said.

Berlin is growing increasingly suspicious that Russia is trying to stir up trouble in Germany to try to weaken Merkel, who has taken a tough line on a crisis that was triggered when Russia annexed Crimea in March 2014.

German officials say Moscow hopes to destabilize Europe and create a vacuum into which it can project its own power.

"Now Putin has opened an information war against Germany as well," Poroshenko said.

The Kremlin has not commented on the accusation that it is pursuing a policy of misinformation in Germany.