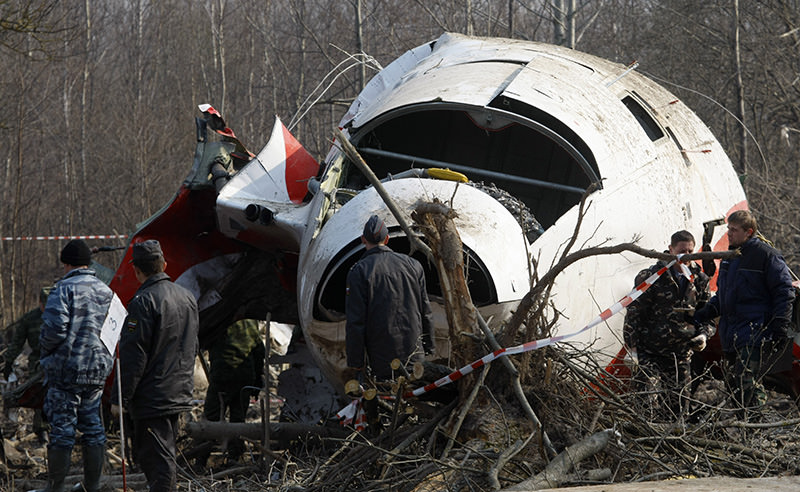 by Daily Sabah with Agencies Feb 04, 2016 12:00 am
Poland's government opened a new investigation Thursday into the tragic 2010 plane crash in Russia that killed President Lech Kaczynski, the twin brother of the chairman of the country's ruling party, along with 95 other top government, military and clergy officials.

The development could exacerbate Poland's already deeply strained relations with Russia and is likely to deepen the ideological divide within Poland between supporters of the conservative and pro-Catholic government and a segment of society that is liberal and secular.

Party leader Jaroslaw Kaczynski and others doubt the findings of state investigations by Poland and Russia, both of which determined that the crash on April 20, 2010, that killed 96 people was an accident resulting from pilot error and bad weather, who were on their way to commemorate more than 20,000 Polish security officers murdered by the Soviet Union, in the incident known as the "Katyn Massacre."

They have suggested that the crash was instead an assassination, and while their accusations are vague, they have implicated Russian leader Vladimir Putin, while also suggesting that then-Prime Minister Donald Tusk, now the head of the European Council, could have been complicit.
Liberal opposition lawmakers say they see no need for a new probe and are satisfied that the crash was an accident.

Announcing the new probe Thursday, Defense Minister Antoni Macierewicz said the original investigation was riddled with "mistakes" and "abnormalities." There will be 21 members of the new commission, many of them engineers or other technical experts, and four advisers from abroad.

Macierewicz made the announcement in the presence of relatives of people who died in the crash. Behind him a TV screen carried the words: "They are waiting for the truth ... We owe them that."

The response of Russia, where crash took place and has been accused of involvement with the accident, was somewhat mild. "This is the sovereign right of Poland, of the Polish people - to know and seek the truth," Russian Foreign Ministry spokeswoman Maria Zakharova said on Thursday in a news briefing. "I hope that this is not linked to politics. This hope is a faint one, but it still exists."

She added that if Poland still had questions about the crash, it should answer them on its own. "From our side, everything has been clarified," she said.

The crash took place near Smolensk, western Russia, close to the place where Soviet Union's secret police NKVD executed some of the 22,000 Polish officers and intellectuals in 1940 following their joint occupation of the country with Nazi Germany in 1939. For decades, Moscow blamed Nazi Germany for the mass executions, while Nazis used the massacre for their own propaganda against the Soviets. The massacre is an enduring symbol for Poland of its suffering at Soviet hands, and an addition to the bloody and uneasy history among the two Slavic nations.

While the crash initially united Poles in grief, it has since given rise to bitter domestic political divisions. The late president's twin brother has repeatedly accused the then-Prime Minister Donald Tusk, now the head of the European Council, of being indirectly responsible for the crash through negligence.

The previous state probe produced no evidence of that. But earlier this year, a Polish court refused to outrightly dismiss a case against Tusk's former chief of staff and two of his aides, brought to court by some of the victims' relatives.
Last Update: Feb 04, 2016 6:20 pm
RELATED TOPICS