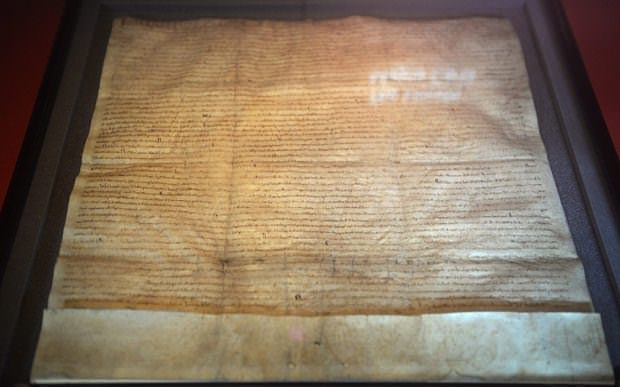 he Lincoln Magna Carta is on display in The British Library in London, Britain, 02 February 2015 (EPA Photo)
by Associated Press Feb 10, 2016 12:00 am
It's often said some laws aren't worth the paper they're printed on. Not in Britain, where for centuries laws have been printed not on paper but on calfskin parchment known as vellum.

Starting next month, however, official copies of laws will be printed on archival paper rather than animal skin, in a modernizing, cost-cutting move.

The House of Commons Administration Committee proposed the change last year, and the House of Lords which decides how legislation is recorded has approved a move that will save an estimated 80,000 pounds ($116,000) a year.

Two official copies of each new law will continue to be printed, with one stored in the Parliamentary Archives and the other in the National Archives. Modern laws also are stored digitally.

Parliamentary officials say the high-quality paper can last up to 500 years, but supporters of vellum say it is much more durable.

The oldest vellum law in parliament's archives dates from 1497, and even older vellum copies survive of documents, including the Magna Carta of 1215.

A previous attempt to end the practice in 1999 was defeated by lawmakers, and vellum-backers again plan to put up a fight.

Conservative lawmaker James Gray said Wednesday that the "retrograde decision" should be reversed. Speaker John Bercow said lawmakers who oppose the move can seek a debate in the House of Commons.
Last Update: Feb 11, 2016 11:59 am
RELATED TOPICS