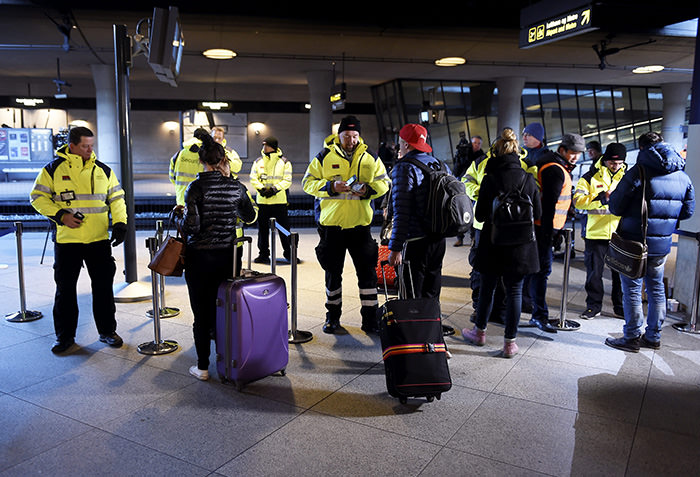 Security staff check IDs at Kastrups train station outside Copenhagen, Denmark, 04 January 2015. (EPA Photo)
by Associated Press Feb 12, 2016 12:00 am
European Union countries are poised to restrict passport-free travel by invoking an emergency rule to impose controls at several borders for two more years because of the migration crisis, according to EU documents seen by The Associated Press.

The switch will reverse a decades-old trend of expanding passport-free travel in Europe.

Since 1995, people have been able to cross borders among Schengen Area member countries without document checks. Each of the current 26 countries in the Schengen Area is allowed to unilaterally put up border controls for a maximum of six months, but that time limit can be extended for up to two years if a member is found to be failing to protect its borders.

The documents show that EU policy makers are preparing to make unprecedented use of an emergency provision by declaring that Greece is failing to sufficiently protect it border. Some 2,000 people are still arriving daily on Greek islands in smugglers' boats from Turkey, most of them keen to move deeper into Europe to wealthier countries like Germany and Sweden.

A European official showed the documents to the AP on condition of anonymity because the documents are confidential. Greek government officials declined to comment on the content of documents not made public.

In Brussels on Friday, EU nations acknowledged that the overall functioning of Schengen "is at serious risk" and said Greece must make further efforts to deal with the migrant crisis at its source.

European inspectors visited Greek border sites in November and gave Athens until early May to upgrade the border management on its islands. Two draft assessments forwarded to the Greek government in early January indicated Athens was making progress, although they noted "important shortcomings" in handling migrant flows.

But with asylum-seekers still coming at a pace ten times that of January 2015, European countries are reluctant to dismantle their emergency border controls. And if they keep them in place without authorization, EU officials fear the entire concept of the open-travel zone could be brought down.

A summary written by an official in the EU's Dutch presidency for a meeting of EU justice and home affairs ministers last month showed they decided that declaring Greece to have failed in its upgrade was "the only way" for Europe to extend the time for border checks. The official said they agreed to invoke the two-year rule under Article 26 of the open-travel agreement.

"With no decrease in migratory pressure and time running out, our ministers agreed ... that the only way to continue beyond the maximum time limit during which these border controls may be carried out is to adopt a (European) Council recommendation under Article 26 of the Schengen Border Code," the official wrote in an email seen by the AP.

In a Jan. 27 report seen by the AP, marked "restricted," the EU Commission cited "serious deficiencies in the carrying out of external border controls," adding that "Greece is seriously neglecting its obligations."

In Friday's statement too, the EU told Greece "that given the scale of the situation, further efforts are needed."

The EU wants Athens to improve screening and disembarkation procedures for those arriving by boat, and to increase its capacity to document and house asylum-seekers and build detention facilities for those facing deportation.

Greece says it has already addressed many of the European concerns. It has promised to complete new screening centers on four Greek islands and build two new transit camps within the next week, with the help of the country's armed forces.

With a sense of compromise, Friday's EU statement acknowledged the vast challenge facing Greece, saying "the very large number of arrivals is such that the external border controls of any member state would be placed under severe pressure."

But it stressed, first and foremost, that the concept of Schengen needed to be preserved. "The difficulties faced by Greece have an impact on the EU as a whole, and have to be resolved collectively."

So far, six Schengen members have imposed border checks, and many of those would have to dismantle them starting in mid-May under Schengen rules. Germany has until May 13, and has made clear that it does not want to relinquish the checks. The other countries are France, Austria, Denmark, and Norway.
Last Update: Feb 12, 2016 10:51 pm
RELATED TOPICS