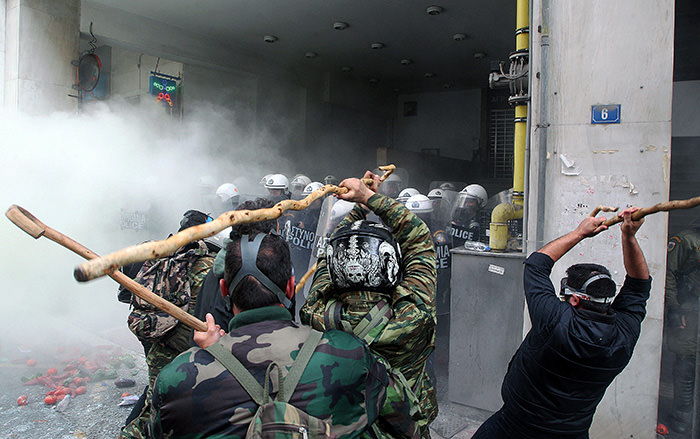 Farmers clash with riot policemen outside the Agriculture Ministry in Athens, Greece, 12 February 2016 (EPA Photo)
by Associated Press Feb 12, 2016 12:00 am
Greek farmers wielding shepherd's staffs and throwing rocks clashed Friday with riot police in central Athens as thousands headed to the capital for a two-day protest against government plans to impose new tax hikes and overhaul the pension system.

Separate clashes broke out on the highways leading into the Greek capital. On its western highway, riot police fired tear gas to disperse farmers demanding to be allowed into the city with agricultural vehicles despite a government ban.

To the east, farmers used tractors to circumvent a police roadblock and block the main highway to Athens' international airport. That left many travelers with planes to catch walking along the road, wheeling their suitcases behind them. The airport road re-opened after about 30 minutes.

In the city center, about 800 farmers from the island of Crete who arrived by overnight ferry rallied outside the agriculture ministry, throwing tomatoes. Tension escalated when police prevented them from accessing the building. Clashes soon broke out, with riot police using tear gas to repel the protesters, who were throwing rocks and setting dumpsters on fire.

At one point, an outnumbered riot police unit was forced to flee up a street, with farmers wielding staffs and pieces of wood in pursuit.

Many of the agriculture ministry's windows were broken and rubble from rocks and broken paving stones lay strewn outside the building. Police said the farmers also threatened to spray them with a pesticide used for olive trees if the police used tear gas. At least four farmers were detained.

"These scenes were aimed at blackening the struggle of the farmers," said Agriculture Minister Vangelis Apostolou. "For us, there is one path that of dialogue to solve the problems of farmers. "

Farming associations have been blockading highways with tractors for more than two weeks, forcing traffic into lengthy diversions to protest a planned overhaul of the country's troubled pension system. So far, farmers have refused talks with the government, insisting the pension reform plan must be repealed.

Bailout lenders are demanding that Greece scrap tax breaks for farmers and impose pension reforms that will lead to higher monthly contributions from the self-employed and salaried employees.

The protests against the pension changes have united a disparate group of professions, including lawyers, artists, accountants, engineers, doctors, dentists, seamen and casino workers.

Other farmers in buses, pickup trucks and cars from north and south were heading to Athens for the main rally, set for Friday afternoon in the city's main Syntagma Square outside Parliament. Protesters have vowed an all-night sit-in and rally Saturday.
Last Update: Feb 12, 2016 3:35 pm
RELATED TOPICS