Closing borders would cause a major crisis in Europe, experts warn 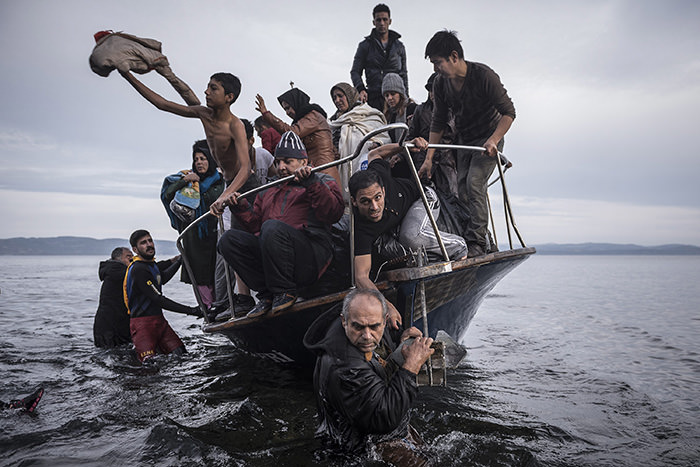 The picture shows migrants and refugees arrived by boat in November 2015 near the village of Skala on the Greek island of Lesbos. (EPA Photo)
by Daily Sabah with Wires Feb 18, 2016 12:00 am

As Europe struggles with divisions over the Syrian crisis, several countries keep imposing more restrictive border policies. Different NGOs, experts and politicians warn that these are temporary solutions and may cause more problems

Experts, political figures and nongovernmental organizations warn that an immediate and thorough solution is needed for the recent refugee influx rather than border fences and tighter border restrictions.

The Norwegian Refugee Council, a humanitarian organization working in more than 25 countries globally, including Greece, Serbia, Syria and its neighboring countries, Afghanistan and Iraq, warned that closure of European national borders and tighter border restrictions could result in "large and unsustainable refugee camps elsewhere on European soil."

As European leaders began discussing the migrant crisis at the European Summit, which began yesterday and will continue today, the NRC called the EU to resist the imposition of border restrictions and said a collective strategy needs to be agreed on. If EU countries keep imposing more and more border restrictions, it may result in large scale and unsustainable refugee camps in Greece and the Balkans, it said in a press release.

Recently, Macedonia began reinforcing and expanding a mesh- and razor-wire fence on the path of migrants arriving from Greece and refugees fear they may become stuck with thousands of people if countries to the north clamp down. Previously, Hungary sealed its border with Serbia and then with Croatia in an effort to stem the flow of migrants. In addition to border closures, many countries introduced controls at their borders, leading to serious warnings that the open-border Schengen system was in danger and it may collapse unless a common strategy is found.

"A European fortress approach, with closed borders, will only serve to dilute EU laws and values and send an appalling signal to the rest of the world regarding our commitment to upholding international refugee law," said Secretary General of the Norwegian Refugee Council Jan Egeland.

Egeland said the problem is now a political crisis that occurred because of "the lack of cooperation and solidarity between European countries."

The NRC called on the EU to commit to receiving more refugees through the EU relocation scheme. Last September, EU countries agreed on a relocation plan for 160,000 people; however, less than 3 percent of the 160,000 refugee relocation places have been made available. The NRC also said the EU should create more safe and legal routes to Europe as more than 410 people died while making perilous journeys across the Mediterranean, according to the recent figures of the International Organization for Migration.

Mehmet Uğur Ekinci, a researcher at SETA, said these limitations regarding migration are only temporary solutions to the crisis and Europe needs more comprehensive solutions. Ekinci said several European countries refuse to accept migrants and to share the burden, which causes deep divisions between states. Unless a long-term solution to the Syrian civil war is found and European countries adopts a collaborative and comprehensive response to the migrant crisis, the influx of migrants will continue and may cause more divisions, Ekinci said.

Greece's Migration Minister Yannis Mouzalas has also said that closing the borders to the Balkans would trigger a "major humanitarian crisis" in his country and would not stop the influx of migrants. He told German business daily Handelsblatt that the only way to stop refugees coming was to put an end to Syria's civil war. He said the European Union needed to work on that as well as tackling the humanitarian crisis in Lebanon, Jordan and Turkey.

"That's the only way we can overcome the crisis. Border closures don't help," he said in an interview published yesterday, just before a summit of European Union leaders in Brussels with the refugee crisis high on the agenda. Macedonia has erected two lines of metal fencing topped with razor wire at the main crossing point for migrants along its southern border with Greece.

Asked about the impact that sealing frontiers with the Balkans would have, Mouzalas said: "If a border were to be closed now, it would cause a major humanitarian crisis in Greece."

He said only 430 refugees had so far been resettled from Greece as part of an EU scheme that stipulated the relocation of at least 160,000 from Greece and Italy. EU members Hungary, Poland, the Czech Republic and Slovakia are deeply opposed to any quota system and want tighter controls on the borders of Balkan countries neighboring Greece if attempts to limit the numbers from Turkey to Greece fail.

On Tuesday, EU Council President Donald Tusk said Europe needed to improve the protection of its external borders and that required more efforts by Greece as well as more support from its European Union partners. But Mouzalas said Greece was protecting its borders and had "the best possible controls" in place on both land and sea. He said that there were 700 officers from Frontex, the European Union's border agency, in place on Greek islands but that was less than the 1,800 Greece had asked for.
Last Update: Feb 18, 2016 5:41 pm
RELATED TOPICS