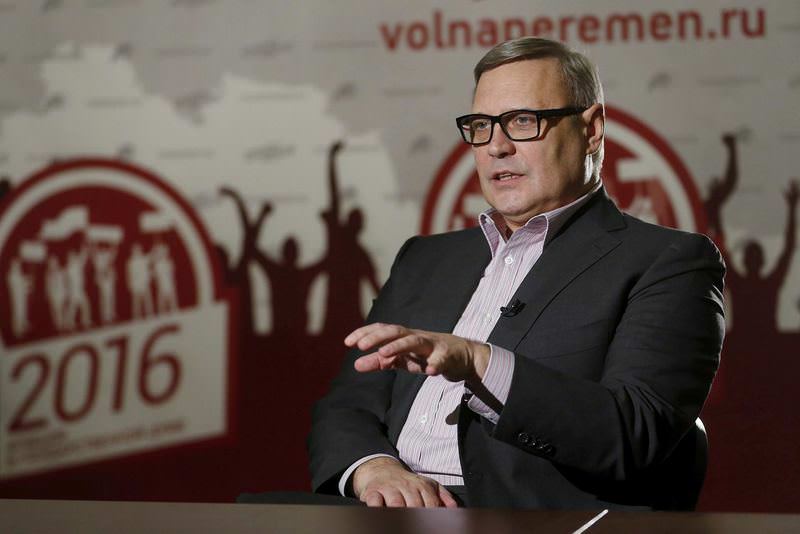 by Feb 18, 2016 12:00 am
Russian opposition politician Mikhail Kasyanov has said he fears for his life after fellow activist Boris Nemtsov was gunned down in Moscow last year, leaving him as the most high-profile Kremlin opponent inside the country. Kasyanov, who served as prime minister under President Vladimir Putin from 2000-2004, said he had received multiple death threats in recent months, but would not flee his native Russia, where he wants to contest elections and hopes for a change in power in as little as two years. "I am afraid for my life and for those of my colleagues," Kasyanov, 58, told Reuters in an interview at the Moscow headquarters of his People's Freedom or PARNAS party. "Anyone normal would fear for their life." Kasyanov was shown in the cross-hairs of a sniper's rifle in a video posted on the internet earlier this month by the pro-Russian boss of Chechnya, a Putin ally known for scathing condemnations of the Kremlin's enemies.

Days later, two men accosted Kasyanov in a Moscow restaurant, rubbed a cake in his face and threatened him. Nemtsov, his friend and fellow opposition leader, was shot dead near the Kremlin almost exactly a year ago. Kasyanov, who is co-chairman of PARNAS, said the Kremlin and nationalist groups had designated him as "enemy number one" now that Nemtsov was dead and because of his decision to head his party's list in parliamentary elections in September. "The authorities want to stop my political activity with threats," he said. "They want to force me out of the country. Their aim is to frighten me. But I have decided that I am going to continue with my activity."

Kasyanov was hounded by pro-Kremlin activists in recent weeks when he tried to address voters in Russia's regions and says his assistants were physically assaulted. Footage of one incident shows him being chased down a corridor. He said he was the only former prime minister who did not have bodyguards assigned to him by the state and that Putin had personally stripped him of his security detail.

The Kremlin did not immediately respond to an email seeking a response to Kasyanov's assertion that he was in danger. In the past, the Kremlin has described threats against Kasyanov as ordinary hooliganism or said it was unaware of the specifics. Police have said they are looking into recent incidents, but have so far not said whether they will open a criminal case. Once on good terms with the Russian leader until Putin fired him and his cabinet in 2004, Kasyanov said he thought Putin had started off pretending to be a democrat before showing his true colors. What followed, he said, was the systematic suppression of freedom of the press, the judiciary, and the introduction of Putin's "vertical" system of rule, in which all officials ultimately report to the Kremlin.

Now, Kasyanov said, he thought Putin had two choices: either to step down when his term expired in 2018 or to go for what would be a fourth presidential term and struggle to keep a lid on the unrest that Kasyanov predicted would erupt. "It all depends on Putin," said Kasyanov. "Either he stops his aggressive policy in and outside the country and starts to relax things and draw up an exit strategy for himself or he ... will end up provoking clashes that could end very badly." Kasyanov said Russians could reach a "revolutionary state" exacerbated by an economic crisis in as little as two years.

Putin himself has not yet said whether he will stand for another term as president, but opinion polls - conducted in a society where the Kremlin tightly controls state TV - put his popularity at over 80 percent. Despite a sharp economic downturn brought by falling oil prices and Western sanctions, Putin's supporters cast him as a father-of-the nation-style figure who has restored Russia to great power status on the world stage and outsmarted the West at every turn. Their tolerance of his critics has sharply diminished since Russia annexed Ukraine's Crimea in 2014 and backed pro-Russian separatists in eastern Ukraine, triggering sanctions and a much more confrontational attitude towards the West. Kremlin supporters have condemned the liberal opposition in increasingly hostile terms, portraying it as a traitorous "fifth column" that needs to be squashed.

Ramzan Kadyrov, the leader of Chechnya who released the video of Kasyanov in a rifle's sites, has used Stalin-era rhetoric to suggest members of the liberal opposition be put on trial for sabotage. One of the suspects charged in the shooting of Nemtsov last year was a former senior figure in Chechen security forces run by Kadyrov. Kadyrov denies any link to the killing. Liberal opposition parties have no seats in the 450-seat lower house of parliament, with only one independent lawmaker seen as sympathetic. Many Russian commentators believe PARNAS will not win any seats in parliament in September and Putin's chief-of-staff has spoken of the need to ensure that what he calls radical forces do not win any representation.

But Kasyanov said he believed 5 million Russians - mostly in big cities such as Moscow, St. Petersburg and Novosibirsk - were ready to vote for his party, meaning it would pass the 5 percent threshold needed to get into parliament and win around 13 seats. If it were able to make further inroads into voters' hearts and minds, something that is likely to be hard when state TV ignores or ridicules PARNAS, that figure could rise to around 25 seats, he predicted. "If we are successful and get into the Duma (parliament) it will be the start of the real collapse of the Putin regime because people will understand that even in a situation where everything is locked down ... real changes can occur." Recalling his time working with Putin, Kasyanov said he thought the Russian leader and his close circle had the common sense to know that serious changes were needed, which meant they would have to relinquish power in a series of elections between now and 2018. If they did not, he said he feared the world's largest country would slip into the abyss. "If he (Putin) simulates elections there will be big problems in 2018," said Kasyanov. "I'm not sure Putin will be able to ensure stability and control the situation. If he turns away ... from the population, the population will use any means at their disposal to fight the regime."