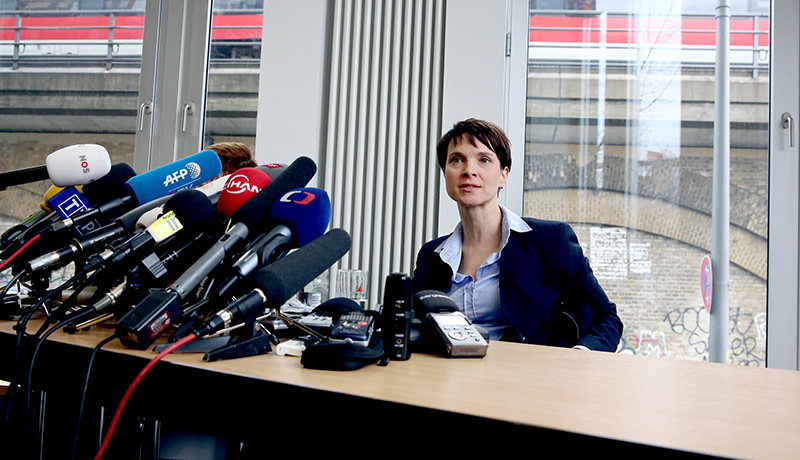 | AA Photo
by Feb 23, 2016 12:00 am
The head of Germany's rising nationalist party has admitted that some of its members were among a right-wing mob that harassed refugees emerging from a bus in the east German town of Clausnitz last week.

Frauke Petry - who insists her Alternative for Germany (AfD) party is not right-wing, just classically liberal and critical of immigration - said that members took part in the action, which saw protesters shout "We are the people" and "Go home" at visibly distressed refugees.

"It is regrettable that things like this happen in Saxony, especially when our members are involved," Petry told broadcaster Phoenix late Monday, referring to the state where Clausnitz is located. "However, I reject the rumours that AfD members organized the action."

Saxony has a history of right-wing protests against refugees. Home to the anti-Islam movement Pegida, the state was the scene of another protest last week that saw a crowd cheering at a blazing refugee accommodation in the town of Bautzen.

Saxony's Prime Minister Stanislaw Tillich on Tuesday said he would increase the annual number of police recruits and add new staff to the judicial system to better deal with the wave of anti-migrant crimes.

An increase of police recruits from 400 to 500 and new hires in the judicial system would ensure better policing and speedy prosecution of perpetrators, Tillich said after a meeting of his cabinet.

A Pegida rally late Monday saw Tanja Festerling, one of the movement's leaders, hailing the Clausnitz incident as an act of "courage" by citizens unhappy with Merkel's open-door migration policies. In her speech, she referred to refugees as "ruthless invaders."

The AfD is expected to enter three state parliaments in elections on March 13. The party's success is attributable to widespread discontent with a large influx of refugees into Germany and Chancellor Angela Merkel's struggle to manage the crisis.
Last Update: Feb 23, 2016 6:08 pm
RELATED TOPICS